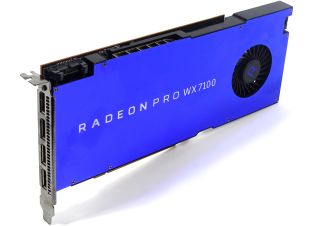 The Radeon Pro WX 7100 features a new naming scheme and a bold color, but is it any better than the workstation cards that came before? Months passed between AMD's Radeon Pro WX 4100, WX 5100, and WX 7100 announcement and actual availability. But we're finally ready to go hands-on.

The original German version of this review was published prior to an important BIOS and driver update. Today's coverage takes those improvements into account, addressing almost all of the concerns we originally raised. Details are spread throughout the review, explaining how the updates affect our findings.

AMD's entry-level model, the Radeon Pro WX 4100, employs a complete Polaris 11 GPU with 1024 Stream processors. That's more than the desktop Radeon RX 460. Its maximum compute performance is 2.4 TFLOPS, and it's limited to 4GB of GDDR5 (rather than 8GB).

Similar to the desktop Radeon RX 480, this card features 144 texture units and 32 ROPs. Its 8GB of GDDR5 operates at a mere 1750 MHz, which explains the somewhat lower bandwidth specification. AMD's decision there is completely understandable in a single-slot graphics card, where every watt of power consumption affects cooling.

AMD aims the Radeon Pro WX 7100 at a broad audience that includes artists and developers responsible for creating content on certified hardware. A street price of ~$630 is attractive to this group.

So, what do we want to compare the WX 7100 to? It's a workstation-class card, so we immediately limit our pool to professional products. Given AMD's price point, it makes sense to consider Nvidia's Quadro M4000. To our list, we add AMD's FirePro W7100 and W7000, both of which preceded the WX 7100, to track performance development.

Several issues in our original review prevented complete satisfaction with AMD's Radeon Pro WX 7100. To begin, the driver installer wouldn't recognize any of the new WX workstation cards, forcing us to swap in an older board just to get the software on our test machine. This problem was resolved after AMD’s team in Toronto provided us with several internal beta versions.

Then, we experienced crashes after activating FSAA in SolidWorks 2016. Reproducing the issue for AMD's driver team yielded another quick resolution. In addition, a bug reported in Creo 3.0 (M90, anti-aliasing active), which caused program crashes, was likewise fixed.

Another issue hampered our efforts to test with an Intel Xeon E5-2640 v4 on an X99-based workstation motherboard. During idle, the memory didn't clock down properly, resulting in power consumption measurements that were 34W too high. This was also resolved, compelling us to generate new measurements.

Our initial coverage also unveiled thermal issues under full load. As it turns out, AMD sent us a pre-production sample with fan curves that were far too optimistic; the fan didn't spin quickly enough. AMD was made aware of our measurements before the review went live, and company representatives provided the necessary corrections.

The production BIOS AMD sent over enabled a more aggressive curve, allowing the card to run a solid 14°F (8°C) cooler. We merged this result with our previous findings, added the fan speed readings, and re-worked the infrared measurements.

Before delving into benchmark numbers, let's summarize the specifications of all three Radeon Pro cards:

In an effort to stay as real-world as possible, we're using a workstation developed in cooperation with the Hamburg-based company Happyware. It sports an Intel Xeon E5-2640 v4 processor and a very good MSI X99-based workstation motherboard. The results obtained with this machine are not comparable to those presented in previous professional graphics reviews, since the platform and software are different.

A lot of apps common to these stories require certified hardware and assume you own a workstation graphics card. However, many companies, including Autodesk, now use DirectX instead of OpenGL, so some high-end titles benefit from cheaper consumer products as well.