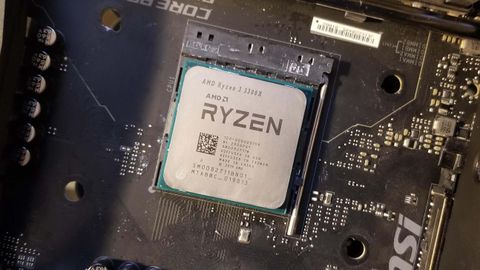 It isn't surprising to find the Ryzen 3 3300X near the top of the threaded Cinebench rendering charts; Ryzen processors are apex predators in the realm of threaded workloads. It is surprising, however, to see the big delta between the stock Core i7-7700K and Ryzen processors in the single-threaded Cinebench tests. The 9350K also sports impressive per-core performance, but it also trails the stock 3300X. Surprisingly, that also carries over to the single-threaded POV-Ray test.

The Ryzen 3 3300X also impresses in the Blender benchmark, but we also see another trend arise in the heavily-threaded workloads. In our gaming suite, the overclocked Ryzen 3 3100 trailed the stock 3300X in nearly all of the real-world benchmarks, but it provides similar performance to the stock 3300X after tuning in these workloads. Basically, inter-core latencies aren't a massive hindrance in 3D rendering performance, unlike in games.

The single-threaded LAME and FLAC encoding test results highlight the Ryzen 3 3300X's agility in lightly-threaded apps, which is obviously helped along by the single cohesive L3 cache. Intel's chips assert their frequency advantage to take the lead, but only after overclocking. Meanwhile, the Core i3-9100 scores a win over the Ryzen 3 3100 in the FLAC encoding test.

The threaded HandBrake x264 and x265 tests really speak to the AVX performance improvements AMD made to the Zen 2 architecture. Naturally, the chips with higher thread counts enjoy a lead here, but the new Ryzen 3 processors offer a surprising amount of performance from four cores and eight threads, especially in relation to comparatively priced Intel models.

Browsers tend to be impacted more by the recent security mitigations than other types of applications, so Intel has generally taken a haircut in these benchmarks on fully-patched systems.

Single-threaded performance still reigns supreme in these tests, though, and the Ryzen 3 3300X is plenty snappy. In its stock configuration, it takes the lead across the board over the other stock processors. The Ryzen 3 3100 isn't as impressive in this round of tests as the Core i3-9100 largely takes the lead, but it's hampered by its locked multiplier, granting the overclocked 3100 the lead.

The Ryzen 3 3300X impresses throughout this group of benchmarks, proving equally adept in both multi- and single-threaded workloads. It often vies with the Ryzen 5 3600 for the lead in threaded applications, showing that it can handle office and productivity applications exceedingly well for its price point.

The stock Ryzen 3 3100 has to lean on its thread count advantage to scrape out its wins against the Core i3-9100, with the latter often leading in lightly-threaded applications.

The heavily-threaded y-cruncher benchmark, which computes pi using the taxing AVX instruction set, finds the Ryzen 3 3300X notching another win over the Core i7-7700K in both stock and overclocked configurations. The Ryzen 3 3100 also grapples with the i5-9400F as it takes a big lead over the Core i3-9100.