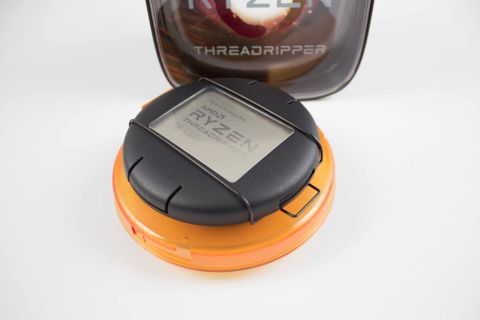 Intel released new microcode for its Skylake-X processors recently, which reduces performance in some titles and lowers the AVX offset by two bins. We also noticed far lower Turbo Boost activation thresholds, though that could separately be the result of MSI's newest BIOS. The changes likely come in response to some of the power and thermal issues we encountered during our extended testing. We consequently retested both Skylake-X processors with the newest microcode.

AMD's Ryzen gaming performance is also a moving target, though it continues to improve over time. Today's story reflects all processors re-tested with the latest chipset, BIOS, GPU drivers, and game patches. We continue seeking out the best performance possible, so in today's review, we dial in AMD's Game mode for our game benchmarks.

VRMark responds well to high IPC throughput and frequency, so it's not surprising to see the 1920X benefit from a clock rate advantage over the 1950X at stock settings. Extra overclocking headroom gives the 1920X a bigger boost once we start tuning.

The Intel processors lead, but it's possible that Ryzen-specific optimizations could improve Threadripper's results.

Switching the 1920X into Game mode creates a 6C/12T configuration that maximizes memory locality and eliminates die-to-die latency. But that comes at the expense of performance in parallel workloads. As such, Threadripper falls below its 8C/16T Ryzen 7 1800X counterpart in this heavily-threaded game.

We include an additional slide with test results using various settings. These numbers highlight that Game mode has a positive impact on lightly-threaded and otherwise incompatible titles, but can be a hindrance for more taxing workloads. A bit of tuning (and switching to Creator mode) pushes the Threadripper models above Intel's Core i9-7900X.

Prev Page How We Test Next Page Civilization VI, Battlefield 1 & Dawn of War III
30 Comments Comment from the forums
Be In the Know