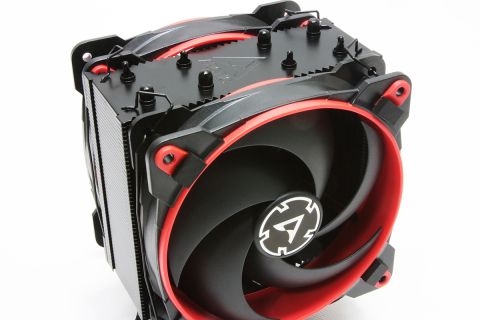 We’ve benchmarked the Arctic Freezer 34 Esports Duo on our Intel i7-5930k running at 4.20 GHz and 1.20v and evaluated it against other midsize heatpipe coolers of similar size and design. We’ll compare the Freezer 34 Esports Duo with the Cooler Master MasterAir MA410M TUF, the Scythe Kotetsu Mark II TUF and the Cooler Master Hyper 212 RGB Black Edition.

For those of you with a keen eye and sharp memory, the Cooler Master MasterAir MA410M TUF has been highly regarded as one of our most recommended midsize heatpipe coolers over the last couple years.

Thermal performance of the Freezer 34 Esports Duo is nearly identical to that of the MasterAir MA410M TUF, which positions it early on with a significant advantage. The budget-friendly Cooler Master Hyper 212 RGB Black sits only a couple paces behind while the Kotetsu Mark II TUF struggles at the top of the thermal range.

A slight fan RPM advantage goes to the Arctic Freezer 34 Esports Duo over the Cooler Master MasterAir MA410M TUF, but as each solution utilizes a dual-fan configuration, this likely has minimal impact.

High fan speeds typically result in higher registered sound levels, but that isn’t always the case nor does it tell the whole story. Decibel levels are the result of the disturbance as fan blades move through and displace air and push it over various components of the cooler, including the heatpipes and cooling fins. Efficiency during this operation ultimately results in less disturbance and in turn, lower noise levels.

Pivoting on solid thermal performance and low noise levels, the Arctic Freezer 34 Esports Duo takes a strong position among the testing group, posting positive marks across the board in our acoustic efficiency evaluation.

Building on a strong acoustic efficiency result, the Arctic Freezer 34 Esports Duo walks away from the competition here, due to a bargain-basement price of $40. That’s over 50% cheaper than the identical-performing Cooler Master MasterAir MA410M TUF that we have been using as gold reference for midsize heatpipe coolers in recent months.

Thermal imaging from our FLIR ONE Pro camera shows thermal loading at 50% fan speeds, particularly around the heatpipe tips and immediate area surrounding them on the cooling fins. At 100% fan speeds, the Freezer 34 Esports Duo shows effective dissipation and cooling over the core of the fin stack with minimal heat soak around the heatpipes. The rear fan also shows a noted decrease in thermal loading as well, which is expected with higher volumes of air present.

Priced at $40, the Arctic Freezer 34 Esports Duo is easy to recommend for any budget build, while proving to be capable of best-in-class cooling performance at nominal noise levels. The only thing holding back the Freezer 34 Esports Duo is limited support of both AMD and Intel sockets, although it does take a mighty swing at the mainstream by supporting the most common desktop slots, and doing one heck of a job at it.