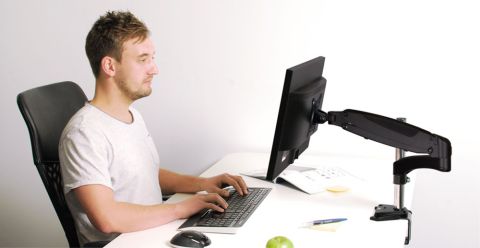 If you want more flexibility and options than those provided by your monitor’s factory stand, Arctic's Z1 Pro and Z1-3D monitor arms have first-rate build quality and versatility and are reasonably priced. With a large range of adjustments and overbuilt components you can be sure your display isn’t going anywhere.

In most monitor reviews at Tom’s Hardware, we talk about the ubiquitous “100mm VESA mount” on the panel’s backside. Nearly every monitor display has these threaded fittings that allow a user to ditch the factory stand and use a bracket or arm of their choice. Using an arm is even more appealing when installing multiple screens and can free up space on your desk by eliminating the monitor’s (or monitors’) footprint.

Today, we’re checking out two products from Arctic, the Z1 Pro ($60 at the time of writing) and Z1-3D ($83). They both clamp to the desktop and provide a full range of ergonomic adjustments, along with powered USB hubs at the base. Where they differ is the Z1-3D arm includes a spring-loaded arm with an internal gas cylinder for easy height adjustments.

The Z1 Pro and Z1-3D kits share the same basic design, with a chrome-plated upright tube and desk clamp. But the 3D unit has a neat trick up its arm.

The Z1-3D model offers an arm with a spring-loaded gas cylinder that has adjustable tension. You can use it alone or add the included extender for more reach on deep desktops. The Z1 Pro has a single two-piece arm with a stout, double-hinge joint in the middle.

In either case, you slide the arm onto the upright and lock it down with a clamp.

The Z1-3D has a separate locking collar with a quick release to allow adjustment without tools. Speaking of which, all the hardware here is held together with stout Allen bolts, and the required keys come in the box. No extra tools are needed.

At the end of the arm, the Z1-3D has a simple hinge joint to its monitor bracket that has a 45-degree tilt up or down and 180-degree horizontal swivel. The Pro uses a ball and hinge joint that has a 15-degree tilt and 180-degree swivel. Of course, by moving the arms, you can move your monitors through the full 360-degree horizontal plane. You can also rotate the panels to any desired orientation, landscape, portrait or in between.

Both monitor arms comes with bolts of varying lengths and thread pitch, along with spacers to interface the brackets with any monitor.

Height adjustment is very generous. It depends on the panel size, but the Z1-3D can place the center of its bracket 23 inches above the desktop with the extender arm in place. The Z1 Pro takes its bracket to 14 inches high. In short, you’ll be able to put your monitor pretty much anywhere you wish within reason.

Thanks to the standardized main upright, you can add on additional arms to mount multiple screens. The Z1-3D accommodates up to 17.6 pounds per mount, while the Z1 Pro can handle a 33-pound monitor.

Appearance-wise, the Arctic mounts are all about function. The pipe is chrome-plated, and all other parts are black. Cable management is included in the form of clips to keep wires from dangling when you move panels up and down.

Arctic’s clamp system works in two ways. You can simply clamp the assembly to a desk that is at least 20mm thick or you can drill a hole to run the clamp through if you don’t want to use your desk or table’s edge.

The USB hub attaches to the clamp with four large bolts. It’s version 3.0 and includes a powered option.

The Z1-3D includes a wall-wart power supply, while the Pro has an additional USB cable that connects to a user-supplied power source. For data transfer or to charge small devices like phones and watches, you won’t need the additional electricity. If you want to plug in your laptop or tablet, you’ll need that extra juice.

After assembling the two kits and clamping them to the solid-core door I use as a desk, my first impression was that Arctic’s arms go way beyond any factory monitor stand. The word solid is a gross understatement. Once locked down, I had little doubt I could pick up my entire desk by this clamp. It felt like it could support a small car.

Pivoting the arms around the pipe was super smooth, thanks to plastic bushings and easy-to-adjust tensioning screws. The 3D’s spring-loaded arm was a pleasure to move up and down. You’ll want to tweak the spring tension to balance the weight of your particular panel. I bolted up a BenQ PD3200U, which is a heavy (18.7 pounds without the stand) 32-incher. Once adjusted, it stayed put without the slightest play or wobble.

The Z1-Pro is a bit more spartan in its options, but provides the same rock-solid build quality. You’ll have to loosen a few bolts to set the position of the monitor, but once you get it right and lock down the fasteners, the screen isn’t going anywhere. Additionally, the hinges’ tension can be adjusted if you want to leave some movements free.

The USB hubs are super handy and feature four downstream ports. One faces straight up (perfect for thumb drives), and the other three face forward. Placement is a bit of a reach, especially with the Z1-3D, but that helps keep cables and devices out of the way on your desk.

After reviewing hundreds of monitors and commenting on their 100mm VESA mounts, it was nice actually use some of the aftermarket arms we’ve talked about. Most displays include a decent stand, but the Arctic Z1 Pro and Z1-3D go way beyond that. The solid build means that your monitor or monitors will be locked down with no wobble or unintended movement.

The wide array of adjustments allows for any position on any desktop and the simple installation of two or three screens. Integrated USB hubs mean you won’t have to leave extra cables dangling from your panels to charge your phone or tablet. And at $60 for the Pro and $83 for the Z1-3D, these arms are a good value as well. If you’re looking to free yourself from your monitor’s factory stand or want an easy way to mount two or three screens, check out Arctic mounts. Highly Recommended.