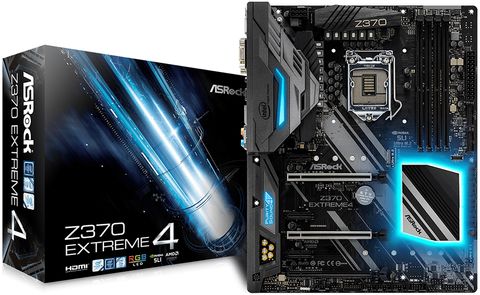 For buyers seeking an SLI-capable motherboard that can also host up to three NVMe drives at once, the Z370 Extreme4 fits its price perfectly.

Before the idea of an enthusiast motherboard broke completely away from the general consumer market and shot into the price stratosphere, $180 would get you a “high end” board that could be appreciated by gamers and power users alike.

Buyers of such boards would usually get an extra local storage controller, an extra high-bandwidth external interface, and a big voltage regulator that wouldn’t be likely to burn out when the CPU was overclocked. In more recent times, though, “high end” has since come to mean something completely different to enthusiasts. Welcome, ASRock’s Z370 Extreme4, to the enthusiast mainstream.

PCI Express storage has mostly outmoded add-on storage controllers, and sheer dollars-and-cents inflation has bumped prices upward. Yet the Z370 Extreme4 still provides a high-bandwidth add-on controller for modern external devices…but at old-school prices. What other surprises did we see on this board given the price? Let's take a look.

You also get RGB, for what it’s worth, both onboard and via a single lighting-cable header. But beyond those things, we’re basically looking at Z370 PCH functions. We still get an oversize voltage regulator for overclocking, and ASRock is thoughtful enough to provide the latest high-mainstream ALC1220 audio codec. The Z370 Extreme4 is even able to support two M.2 and one slot-mounted NVMe drive simultaneously without dipping into the CPU’s 16 PCIe lanes: It’s always nice to see a company make full use of the chipset’s limited capabilities.

The high-bandwidth interface is USB 3.1 Gen2, courtesy of ASMedia’s PCIe 3.0 two-lane controller, which feeds a Type-C and a Type-A port. ASRock wasn’t so kind as to also include a pair of USB 2.0 ports for a keyboard and mouse, which would have made sense given the Z370’s HSIO limitations, but there is a PS/2 port for your vintage keyboard or mouse. There’s even a VGA port for customers old enough to have Y2K flashbacks.

The only annoyance around the lack of additional USB ports, even if they must be USB 2.0, is that some of us like to leave the 10Gb/s ports open for portable devices. Doing so leaves only four USB 3.0 ports (a.k.a. USB 3.1 Gen1). Buyers also get DVI-D and HDMI, six analog audio jacks, and a digital optical audio output that is feature-enhanced with a DTS Connect license.

The antenna bracket resides directly behind a Key-E M.2 port, which can hold a notebook-style Wi-Fi module. We often criticize ASRock for not including antenna cables with these brackets, but the proximity should allow builders to remove the module and antenna wires from an adapter card that’s been assembled in the same manner. The benefit of using this Key-E interface isn’t just that you’ll spare a PCIe slot, but also that you won’t need to run that annoying USB internal link cable that’s required by adapter cards.

You may have noticed the Gen2 front-panel USB 3.1 header and questioned why it hasn’t been mentioned yet? That’s because it doesn’t use a Gen2 interface. Instead, it receives one USB 3.0 lane. And since USB 3.0 lanes are typically paired, the other lane feeds one of the USB 3.0 headers via a two-port hub. The other USB 3.0 header gets two lanes directly from the PCH. (For those counting HSIO resources, that’s four.)

Eight of the remaining 26 HSIO ports are allocated to two M.2 drive slots, four to the bottom x16-length slot, four to SATA, four to the USB 3.0 ports of the I/O panel, three to PCIe x1 slots, two to the USB 3.1 Gen2 controller, and one to the Key-E slot. If you’re wondering why only four are required for the SATA ports, that’s because the other four ports steal lanes from M.2 slots. Or vice versa. The answer depends on whether you’d rather use eight SATA drives or four SATA and two M.2 drives.

Fed directly by the CPU, two metal-shrouded PCIe x16 slots transition from x16/x0 to x8/x8 modes when a card is detected in the second slot. We already mentioned the four-lane bottom slot, but should add that the three x1 slots are open-ended so that longer cards can be installed. For two of those slots, the length of the card interface that fits will be determined by the length of any M.2 device mounted before it.

In addition to documents and software, the Z370 Extreme4 includes a case badge, an I/O shield, four SATA cables, and an HB-style SLI bridge.

Next Page Software & Firmware
7 Comments Comment from the forums