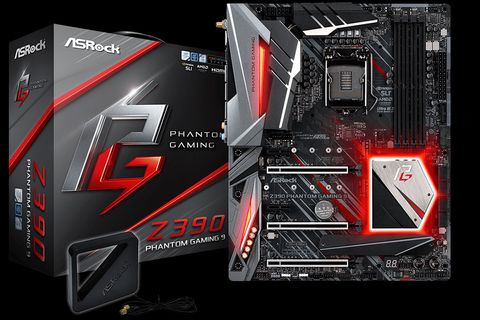 Buyers who need something faster than Gigabit Ethernet but can’t afford to implement 10GbE will find good value in the Z390 Phantom Gaming 9.

It’s no secret that 10GbE can be expensive to install, but what if you want something faster than Gigabit Ethernet over a single cable? ASRock’s 2.5GbE-equipped Z390 Phantom Gaming 9 splits the price difference between its 10GbE and base models, supports cheaper Cat 5e cabling, and comes with all the other added features of the 10GbE model. Those “other added features”, such as faster Wi-Fi, tip value towards the cheaper Z390 Phantom Gaming 9.

Buyers still get a third Gigabit Ethernet port that’s faster than the other two (Intel Gigabit Ethernet), and the Phantom Gaming 9 even has the 1.73Gb/s version of Intel’s latest M.2 Wi-Fi/BT 5.0 module, so its feature set is closer to that of the Taichi Ultimate than to the Taichi. The rest of the I/O panel connections remain the same too, with four 10Gb/s and four 5Gb/s USB 3.1 ports, a legacy PS/2 port, DisplayPort 1.2, HDMI 1.4, five analog audio jacks, and a digital audio output. We just think that if ASRock wants to build a brand, it could do more to visually differentiate those products.

Like every other version of the board, the Z390 Phantom Gaming 9 splits its top x16 slot into x8/x8 and x8/x4/x4 modes as cards are added to the other silver slots, which still means that users of two PCIe NVMe drives will get the benefit of two sets of direct pathways to the CPU, while those hoping to enable SLI will need to leave the lower slot empty to make sure the middle slot gets the required eight lanes. All three boards also tie three M.2 slots to Z390 PCH pathways, forcing them to share the bandwidth of the four-lane DMI between the PCH and CPU. The metallic-colored power and reset buttons in the lower front corner are reserved for the Phantom Gaming 9 and Taichi Ultimate, however.

At the risk of sounding repetitive, the bottom of the Z390 Phantom Gaming 9 is filled with the types of cable headers for which cabled can generally be folded under the heat sink of a graphics card. These include a front panel HD Audio at the back, followed by Addressable LED, two regular RGB LED, Thunderbolt add-in card, one (of eight) four-pin fan, TPM, a four-pin (single-port) USB 2.0 half header, a standard nine-pin (2-port) USB 2.0, beep-code speaker and legacy (three-pin spaced) front-panel LED, an Intel-standard LED/button group, and another four-pin fan. Seven of the fan headers have both PWM and voltage-based control options, but the CPU fan header is PWM-only.

Two of the PCH-connected M.2 slots support 110mm-long drives, but the top one is limited to an 80mm maximum so that a PCIe x1 slot will also fit, While both PCIe x1 slots are open-ended, placing a long card (such as x4) in the top one requires shoving it down against the top of any M.2 drive mounted there, and the second one appears to fit nothing longer than an x4-slot card due to RTC battery placement. Our only concerns here are interface length, since the front-panel USB 3.1 Gen2 header is positioned between the forward edges of any cards mounted in the top x1 and top x16 slots, and the SATA interfaces forward of the lower slots point forward, under the cards.

Other than the limits mentioned above on installing longer-than-x1 cards in the open-ended x1 slots, the Z390 Phantom Gaming 9 doesn’t have any noticeable layout issues. HSIO sharing between SATA and M.2 ports is still an issue brought on by the Z390’s paucity of resources, but the fact that filling the M.2 slots can cause half the SATA ports to be shut off (see our features chart) has little do to with layout. Users with extra-old cases might find that the forward-facing SATA and front-panel USB 3.0 ports are pointing directly into a drive cage, but that’s broadly been addressed in enthusiast-market cases for at least the past decade. The second front-panel USB 3.0 header points outward, just like the Gen2 USB 3.1 header, and both are well out of the conflict area of expansion cards.

Next Page Software and Firmware
7 Comments Comment from the forums