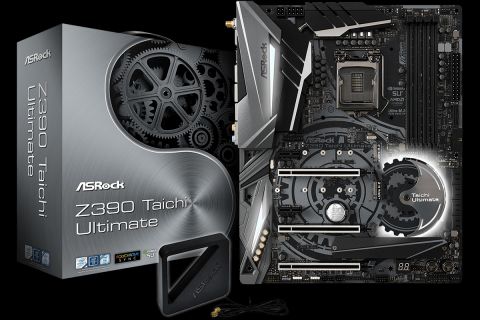 Improvements over the Z390 Taichi are worth more than the Z390 Taichi Ultimate’s price difference, and its updated firmware adds efficiency. Overclocking and VRM cooling should be better, but this board is still a good fit for value seekers who need a 10GbE connection.

Buyers who need a ten gigabit Ethernet (10GbE) connection have a few choices, but most of those involve buying a card and finding a place to stick it. The Z390 Taichi Ultimate integrates a reputable Aquantia controller and costs a little less than the combination of a Z390 Taichi plus a separate Aquantia card. Buyers don’t lose the original Taichi’s dual-gigabit networking by opting for this board, and ASRock even upgrades its Wi-Fi controller to 1.73Gbps.

So who needs a quad-networking motherboard? ASRock’s Z390 Taichi Ultimate adds 10GbE to the dual Gigabit Ethernet available on the cheaper Z390 Taichi, and upgrades its Wi-Fi module to a faster 1.73Gbps. Even if we just assume you’ll use the Wi-Fi module as an access point, that’s still three RJ-45 jacks to fill with something. And assuming you have a 10GbE connection to the internet, you’ll still have two Gigabit interfaces into which you can plug…two other PCs?

At least then the other two PC’s won’t have to compete with each other over a single Gigabit connection as they would have through a switch. Regardless of what you choose to do with all those jacks, if you opt for this board, you'll spend about $279, which pits the Tiachi Ultimate directly against Gigabyte’s Z390 Aorus Master.

If you looked at the above image and thought that networking upgrades were the only changes over the Z390 Taichi, you obviously missed the chrome-colored Power and Reset buttons that the Z390 Taichi Ultimate has in place of the circular blank spots of the non-Ultimate version.

The Aquantia AQC107’s 10GbE port is color coded red for easier identification, with the others fed by Intel PHY and PCIe x1 controllers. The upgraded Wi-Fi module doesn’t look any different from the bracket side, and uses the same PCIe/USB interface as the Z390 Taichi’s module. The Key-E slots of both boards lack the Z390’s CNVi capability that was supposed to allow for cheaper 1.73Gbps solutions.

Panning out, we see nothing to surprise readers of the former Z390 Taichi review: ASRock’s layout differs from that of most competing solutions by converting CPU pathways from x16/x0/x0 to x8x/x8/x0 and x8/x4/x4 when cards are added to the second and third slot, which benefits users of PCIe x4 storage solutions by not forcing them to use a slot that shares bandwidth across the PCH. For example, all three M.2 slots are connected to the Z390 PCH, even though its PCIe hub has only four pathways connecting it to the CPU. Conversely, SLI users will need to leave the third x16 slot empty of a graphics card, since SLI requires at least eight lanes per card. But with Nvidia limiting SLI setups with recent-generation cards to just two, this will only be an issue for gamers carrying over older cards.

The open-ended PCIe x1 slots are also retained, allowing longer cards to be inserted though with some restrictions: The upper x1 slot is so close to the M.2 slot that the exposed end of longer cards will be shoved up against the tops of the M.2 module’s IC’s, and the lower x1 slot is partially blocked by the RTC battery.

The first and third M.2 slots each steal two HSIO pathways from SATA, disabling ports 0/1 and 4/5 if populated. The second M.2 slot has dedicated resources for PCIe, but its legacy SATA interface steals SATA port 3.

The front-panel USB 3.1 Gen2 header still points outward between the center line of the top x1 and x16 card, but is so far forward of the card slots that it’s not likely to interfere with an x1 card of any length. And regardless of which SATA ports your M.2 slot have disabled, all eight point forward to fit underneath the leading edge of long expansion cards.

The Z390 Taichi Ultimate gets a more modern-appearing Wi-Fi antenna than the pair including with the Z390 Taichi. It also includes four SATA cables, an I/O shield, a high-bandwidth SLI bridge, a foil case badge, a driver disc, and documentation.