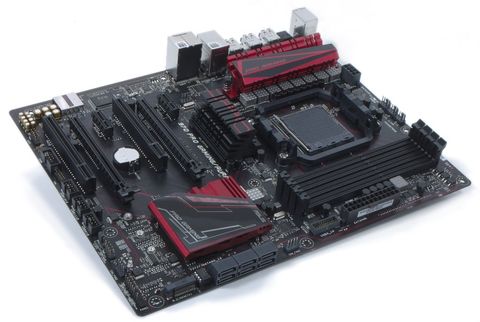 I decided to ditch the DDR3-1600 modules from Mushkin due to the requests by the commenters on my previous articles, and searched the labs for an appropriate alternative. Fortunately, Thomas had finished looking at a 2800MHz kit from Klevv in his DDR3 vs. DDR4 article, and he had access to the 2666MHz variant. Two 8GB kits now fully populate my test system.

The main downside to this addition is that these kits also emit an aura of their own. In order to implement the diodes, they have a taller heat spreader than standard DIMMs, and those force me to reverse the orientation of my CPU cooler. This isn't too big of a deal, but it did prove to be an airflow challenge when overclocking this specimen.

To keep these Vishera cores cool, a Sunbeamtech cooler is utilized to provide maximum air-cooling capacity across all of my AMD test platforms. Zalman's ZM-STG1 paste is used as the thermal compound for this test platform.

It might not be the latest generation, but the Radeon HD 7970 has enough performance to play the latest games at decent settings. It's heavy and it draws a lot of power, which makes it a good candidate for testing the power subsystem of my test samples.

Even with these power-hungry components, this 500W, 80 Plus Gold-certified power supply has no problem keeping the system going with constant power while running the standard test suite and individual stress tests.  However, these components will draw a little more than 500W of power when running both Prime95 and FurMark.  Note to self: When conducting a 100 percent stress test, get more power!

The Mushkin Chronos SSD is still running strong in this AMD test system, so I will continue to use that disc. We are still finalizing our Windows 10 test image across our reviewing teams, so I am still using my same hard disk image from my previous review. However, I did implement two game benchmarks to please the crowd and provide some reference points to compare against previous writers' suites.

One final note about my configuration: I ran all of these benchmarks in DDR3-2133MHz mode. I did this intentionally, to show how much of a performance increase we will see in the synthetics, while demonstrating that this doesn't play out as well in the applications.