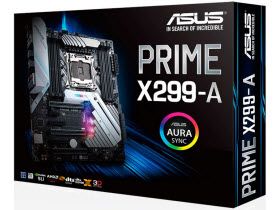 The Asus software suite is carried over from our Prime X299-Deluxe review, though this less-expensive model doesn’t have the “Live Dash” display for which the Deluxe version had additional software. Even the “Dual Intelligent Processors 5” tuning suite is unchanged, though the Aura interface appears slightly different when paired with the connectors of this model.

The reason we’re so happy that the software suite was already detailed in the earlier X299-Deluxe review? The Prime X299-A’s firmware requires a large load of screenshots. It opens to EZ Mode for amateurs. It doesn’t show the actual clock settings here, but you do get XMP and boot-priority selection, along with popup menus for fan control and monitoring.

Pressing the keyboard’s F7 key brings users to the Prime X299-A’s Advanced Mode menus. Here, things like overclock and power settings are accessible. Users will also find a setting to change to Advanced Mode as an initial entry point during consecutive boots.

Our test CPU is thermally constrained to overclocking at no more than 1.15V CPU core, and it typically reaches 4.4GHz at that voltage. The Prime X299-A got us there without any additional fuss. DRAM voltage was a smidge less consistent, as we noted a 5mV bias between banks where one ran around 14mV and the other around 19mV higher-than-set, as revealed by a voltmeter rather than the internal reading.

The Prime X299-A supports a full set of manual adjustments for primary, secondary, and tertiary memory timings. We test motherboards at XMP-3866 default timings, and the board reached only DDR4-3696 without throwing up memory errors under extended testing.

The Prime X299-A includes memory submenus for ODT Control, Skew Control, IO Control, and TRL IOL Control. Testing these settings could have added weeks to the review time, but we’re sure someone with the right head and heart for the task will find some of these menus useful.

CPU Load-Line Calibration allows users to offset “vdroop” by telling the board to dial up CPU core voltage as it sags under load. The “Auto” setting was perfect for our CPU sample and overclocking voltage.

We didn’t have to manually set maximum power to achieve our overclock, but did it anyway out of habit.

Though a fan-menu popup is also available via hotkey, the settings are included at the bottom of the Prime X299-A’s Monitor menu. All seven fan headers can be switched between PWM and voltage-based fan control as desired, and the board also has automatic mode detection.