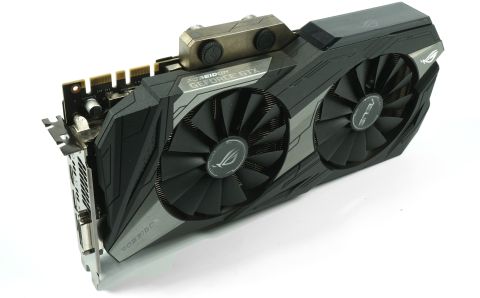 Overclocking the ROG Poseidon GeForce GTX 1080 Ti under air cooling is pointless, for the most part. Asus tunes this board aggressively straight from the factory, leaving little headroom available for higher frequencies. Especially in a closed computer case, the card is already at its physical limits.

With sufficient water cooling, however, we were able to reach 2076 MHz. That's where our chip hit its ceiling, even after installing a high-end loop, increasing the power target, and applying a bit of extra voltage.

Under the effects of air cooling, our measurements at the GPU package and the chip's own reported values appear identical, since thermal energy dissipates more slowly.

Using water cooling, however, reveals a minor weakness in Asus' solution. Whereas a full-coverage water block wouldn't allow a difference of more than 5 Kelvin between the liquid and GPU diode, this hybrid implementation shows a gap of up to 17 Kelvin in our overclocked scenario. Moreover, the board temperature below the GPU package is also significantly higher than what Nvidia's GP102 reports.