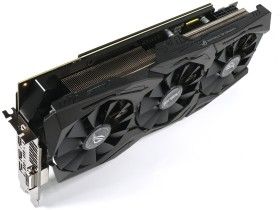 Like Gigabyte and Sapphire, Asus deviates significantly from AMD's reference layout. Unfortunately, this also means that the design is incompatible with most existing full-cover water coolers.

Asus implements six power phases with doubling, resulting in 12 voltage converters for the VDDC and one phase for the memory (MVDD), just like AMD. We're particularly interested in the way two of those VDDC converters were positioned. Since there was no more vertical space available, they were simply arranged to the left, and must therefore be cooled separately.

The sources of other auxiliary voltages are also visible in our layout diagram.

A look at the board's back side reveals very few active components. This would have allowed plenty of space for a heat-conducting pad between the PCB and backplate, which could have been used to draw thermal energy away from the voltage converters.

Asus implements a pair of eight-pin connectors to complement the PCIe slot's power delivery. Since our measurements show the motherboard slot only feeding this card 25-27W, those two connectors handle the rest.

As with AMD's reference design, the focus is on International Rectifier's IR35217, a dual-output multi-phase controller that provides six phases for the GPU and an additional phase for the memory. But again, there are 12 regulator circuits, not just six. This is a result of doubling, allowing the load from each phase to be distributed between two regulator circuits.

A total of six International Rectifier IR3599 multipliers are used to double the controller's phase count. The actual voltage conversion of each converter circuit is performed by an IR3555M, also from International Rectifier. These so-called PowIRstage chips combine the high- and low-side MOSFETs, driver, and Schottky diode in a single, highly integrated circuit.

As mentioned, the memory's power is controlled by International Rectifier's IR35217 as well. One phase is fully sufficient for this card, as its HBM2 is less demanding. As with the VDDC, an IR3555M is used, along with SAP II chokes for smoothing the output.

Creating the VDDCI isn’t a very difficult task. But it's an important one since this regulates the transition between the internal GPU and memory signal levels. It’s essentially the I/O bus voltage between the GPU and memory. A constant source for 0.9V is generated as well, along with a 1.8V source (TTL, GPU GPIO). These three voltage converters are equipped almost identically, relying on an MPS MPQ8633 synchronous step-down converter.

In the input section, there is a 330nH ferrite-core choke that helps block load peaks. If you are looking for shunts, similar to what we've seen on Nvidia cards, you won't find them. Unfortunately, Vega doesn't support current flow control on the input side.