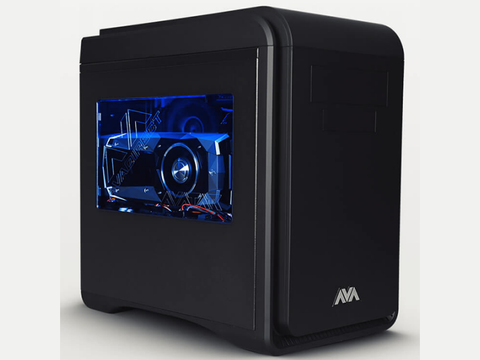 The 2017 AVADirect Avatar is an excellent 1440p and 4K gaming PC, offering top-tier performance with its Intel Core i7-7700K and EVGA GeForce GTX 1080 Ti Founder’s Edition graphics card. AVADirect aims for rock-solid stability in the Avatar series, so it won’t achieve the same framerate highs as systems with overclocked GPUs, but the overall value is enhanced with several aesthetic extras (RGB LED fans and lights) at no extra cost. Compared to its former self, the Avatar offers substantially more value with its upgraded CPU, GPU, 240mm liquid cooler, and fans. It also significantly undercuts its similarly equipped competition, priced as configured at $2,677. AVADirect has come a long way since our last desktop review, and the Avatar is an excellent example of the company’s rededication to offering customers more value than the average custom shop. We know enthusiasts won’t bite on the likes of the Avatar (we can make it ourselves!), but for average consumers looking for a powerful custom gaming PC with the latest technologies and an easy-to-use configurator, the Avatar is Tom’s Hardware Approved.

Ever get that feeling of déjà vu? It seems like only yesterday that we were putting AVADirect’s Avatar gaming desktop through its paces. In reality, it’s been roughly eight months since we first reviewed the Avatar; a time before the dawning of Kaby Lake processors and the GTX 1080 Ti. The new version of the micro-ATX platform is priced slightly higher than the previous submission at $2,677, but it features those newer components, with a Core i7-7700K and a GeForce GTX 1080 Ti housed in the familiar chassis. It’s time to see if the new iteration of the Avatar can surpass its predecessor. (We'd sure hope so.)

The AVADirect Avatar features an Aerocool DS Cube case, which houses a micro-ATX motherboard positioned horizontally (upright) in a steel and plastic chassis with a windowed side panel. The front panel has a faux-leather surface, making it appear sleek and sophisticated. The top of the case has a ventilated panel, but you can swap it out for a solid panel (also faux-leather clad) if you choose. However, we wouldn’t recommend this; the 240mm liquid cooling radiator is mounted beneath the vent. The case is also easy to clean, with a PSU fan filter and an easy-to-remove front panel (careful where you grab it, we learned our lesson the first time around).

The window on the left-side panel showcases the graphics card, which appears upright and is well-illuminated by the 20-color remote-controlled LED light strip and RGB LED fans. The clear acrylic window also features an etched AVADirect Avatar logo.

The front panel I/O is unchanged from the previous version of the Avatar, with two USB 3.0 and two USB 2.0 ports on the right side of the top of the case. The power button and headphone-out/mic-in jacks are on the left side. The rear panel sports two USB 3.1 Gen2 ports (one Type-A, one Type-C) powered by an ASMedia controller (no Thunderbolt 3), in addition to four USB 3.0 and two USB 2.0 ports connected directly to the chipset. There’s also a PS/2 combo port for legacy peripherals, and the S/PDIF and five-port audio connections are fed by an ROG SupremeFX 8-channel audio codec.

For display output, the graphics card features the standard GTX 1080 Ti Founder’s Edition connections--an HDMI 2.0 port and three DisplayPort 1.4 interfaces. The motherboard also has an HDMI 1.4 and DisplayPort 1.2 interface, but you won’t need to use those unless you are going for more than four displays. To get online, you can use the Intel i219V Gigabit LAN RJ45 port or the integrated dual-band 802.11ac Wi-Fi receiver.

Removing both of the side panels exposes all the top-tier hardware and cabling. An Intel Core i7-7700K sits atop an Asus ROG Strix Z270G micro-ATX motherboard with a 16GB (2x8GB) kit of Kingston HyperX DDR4-2400 memory. The motherboard is rich with features and connectivity (including integrated Wi-Fi, dual M.2 slots, and RGB LED lighting on the PCH heatsink. The RAM is unchanged from the previous version, and its frequency (2400 MHz) is somewhat standard for the newer Z270 chipset (whereas it was above-average for the Z170 version). However, the capacity is enough to handle any AAA game title coming down the pipeline for some time.

The EVGA GeForce GTX 1080 Ti Founder’s Edition graphics card is about as good as it gets for desktop GPUs, and it should provide impressive framerates at high resolutions. The reference Nvidia shroud further adds to the Avatar’s sleek look, and the blower-style cooler exhausts the hot air out the back of the PC.

AVADirect mounted a 250GB Samsung 960 EVO NVMe SSD in the motherboard’s primary M.2 slot (located below the secondary PCIe slot). The Avatar we previously reviewed featured a 500GB Samsung 850 EVO SATA SSD, and at the time, AVADirect didn’t offer M.2 SSDs in the Avatar at all. Although the SSD capacity of the new version has been cut in half, the performance should be significantly higher, with the 960 EVO NVMe SSD rated at up to 3,200 MB/s and 1,500 MB/s sequential read and write speeds, respectively (the 500GB Samsung 850 EVO is rated up to 540 MB/s and 520 MB/s). The 3.5" drive bay houses a 1TB 7,200RPM HDD, which is a good starting point for a moderately sized gaming library, and it makes up for the minimalist capacity of the primary SSD.

The Avatar gets its power from an EVGA 650 G3 80 Plus Gold certified fully modular PSU, which is mounted beneath the motherboard and main chamber at the bottom of the chassis. This is plenty of juice for the GTX 1080 Ti in the Avatar (Nvidia recommends a 600W PSU), and it leave a little headroom to handle overclocking. The modular cables are of the stock EVGA variety, but the cable management is pristine, with the front panel, audio, USB, power, fan, and SATA cables all tied neatly to the case about as clean as one can possibly make it.

A Corsair H110i 240mm liquid CPU cooler is mounted to the top (ceiling) of the case, partially inside of the 5.25” drive bay. The cooler is an added feature (the stock configuration of the Avatar has an air-cooled CPU heatsink), and it comes bundled with the overclocking service for $124. Similar to the primary storage, this is a substantial upgrade from the previous version of the Avatar, which had a 120mm CPU liquid cooler mounted to the rear exhaust vent.

This new version also comes with three Corsair SP120 RGB LED fans (two on radiator, one on rear exhaust), which connects to a six-port RGB fan hub (mounted to ceiling of the PSU bay) and a three-button controller mounted near the 3.5” drive bay. It’s somewhat inconvenient that you have to open the chassis to access the RGB fan controller, but the fact that AVADirect puts the three pricey fans in the Avatar at no extra cost is enough to forgive that. The rear fan also has a protective grating mounted on it, which prevents the CPU cooler's tubing from hitting the fan blades. A 200mm fan at the front of the case takes in fresh air, and the RGB LED light strip remote control box is mounted directly behind the larger intake fan.

The AVADirect Avatar doesn’t come with any additional software (aside from Windows), and the installation is as clean as can be. However, the company ships the device with all of the components’ manuals and extra parts (cables, adapters, Wi-Fi antenna, SLI bridge, etc.) in a convenient accessory box (which is really just a motherboard box with AVADirect graphics on it).

The Aerocool DS Cube’s alternate top panel (solid, instead of vented) is also included in the box. Consumers will appreciate the lack of often-pesky software trials and bloatware, and having all the extra components allows you to alter or expand your configuration down the line.