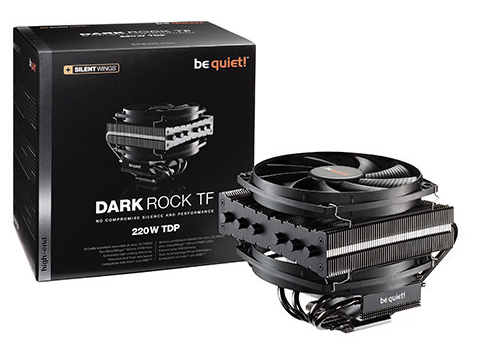 The Dark Rock TF may be unique among our tested downdraft coolers in scale, but that doesn’t mean there weren’t any other coolers of this height to compare to. The server-oriented NH-U9DX i4 stands 0.1” shorter than the Dark Rock TF, and though it also has tiny fans, it performed excellently in its review. It even outpaced the Dark Rock TF's thermal performance, though we expect server-oriented coolers to have some noise issues.

The Dark Rock TF’s fans run slightly below the rated RPM, due to resistance of the sink fins and backpressure from the motherboard they face. Turning the motherboard’s PWM-based fan controller to 50% duty cycle, we see that the lower air pressure allows them to run faster than 50% of the rated speed.

The Dark Rock TF is quieter than any other cooler in this comparison, and that could give it a competitive cooling-to-noise ratio as well as making it a reasonable choice for quiet environments. It spun down to produce only 19.1 decibels at 1m (calculated) when the motherboard’s fan controller was set to 50% duty cycle. The similarly tall NH-U9DX i4 produced only slightly more noise, and the included resistor wire didn’t spin it down as much.

The Dart Rock TF can’t match the value of the DeepCool Assassin II, but that’s not really a fair comparison since the shorter downdraft cooler is designed to fit more cases. Unfortunately, it also loses to the even smaller NH-U9DX i4. And that might not be a fair comparison at “low” fan speed, since I used Noctua’s resistor wires rather than 50% PWM setting. I did this because I always want to include the manufacturer-supplied fan control in the results, whenever provided. The cost of controllers is part of the price of the product, after all.

Of course the NH-U9DX i4 does have a few shortcomings, such as its inability to support anything other than the square and narrow ILM version of Intel’s LGA 2011 (including v3). Noctua sells a completely different model called the NH-U9B SE2 for other form factors, yet our review of the NH-U9DX i4 showed that these two products differ only in their mounting kits. That is to say, Noctua’s customers need two different model numbers to figure out what to buy instead of the Dark Rock TF from be quiet! What does this all mean for the Dark Rock TF?

Entering the review process with the assumption that a product will win our stamp of approval, I lose that enthusiasm only when that product comes up significantly short of competing samples. The lack of any similar capacity downdraft coolers to compare should have made it easy for the Dark Rock TF to reach that mark, yet today’s review showed that a 92mm cross-draft cooler can beat a 135mm downdraft cooler in temperature, noise, price and size.