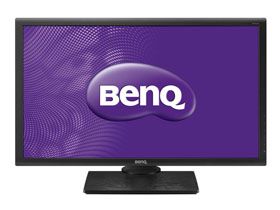 It’s well established that an IPS panel, regardless of the monitor it’s used in, will be more expensive than a TN screen. After three years or so, prices of premium business-class monitors like the PD2700Q haven’t dropped much, but they are lower than they were. In 2013 and 2014, we reviewed several 27" monitors with QHD resolution that sold for between $600 and $1000. And a professional model with a factory calibration could easily push the cost into four figures.

The PD2700Q is not billed as a professional’s tool, and it doesn’t include a wide gamut option or a factory-certified calibration. But it does offer performance that easily compares with more expensive products and costs far less than its enterprise-ready counterparts did just a short while ago. There are cheaper screens out there, but none will compete in overall build quality and performance with this BenQ.

As we mentioned at the beginning of the review, this is considered a Designer Monitor. One might think that refers to its styling, but after working with it, it is quite obviously for designers. A quick check of BenQ’s website shows the PD2700Q is part of the Photographer and Designer Monitor Series. Price-wise it fits below the Color Management and Specialty displays, but costs a bit more than Home & Office products.

You’ll save some cash here because there is no wide gamut or factory calibration. Measured performance, however, is nearly on-par with the excellent pro-screens we’ve seen from BenQ in the past, like the SW2700PT and the PV3200PT. Out-of-box color accuracy is more than sufficient to eliminate any calibration requirement, and contrast is at the extreme upper-end of all the IPS panels we’ve tested. Aside from some screen luminance uniformity issues, which are sample specific, there is nothing but high performance to be had here.

Gamers will likely be shopping elsewhere since the PD2700Q tops out at 60Hz and has a bit too much input lag for those with rapid trigger fingers. For any other use we can imagine though, this display will perform extremely well. And thanks to its excellent build quality, it should last through multiple computer upgrades.

Prev Page Viewing Angles, Uniformity, Response & Lag
4 Comments Comment from the forums
Be In the Know