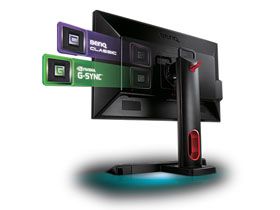 The BenQ XL2420G delivers everything a hardcore gamer could wish for. Even though it uses a TN panel, it’s a high-quality part that delivers excellent contrast and color accuracy. Aside from a slight hiccup in our gamma test, it easily meets all our standards. If you like BenQ and you want G-Sync it’s your only option for now. Hopefully as more competition becomes available the price will drop.

BenQ has always catered to gamers with its many different monitor offerings. Currently, the company sells six qualifying displays between the RL and XL families, with prices ranging from $159 to $650. The XL screens represent the high-end with fast refresh rates, lots of gaming-specific features and now G-Sync.

Today we’re checking out BenQ’s first G-Sync-capable screen, the XL2420G. It builds on the feature set we saw in the recently-reviewed XL2720Z and XL2430T. Both models performed well enough to earn awards for their top performance and build quality.

Equipped with motion blur reduction, gaming-specific picture modes, a zero-flicker backlight with no pulse-width modulation and a 144Hz maximum refresh rate, the latest XL model adds a totally new G-Sync mode with its own OSD settings. It’s like having two monitors in a single chassis.

BenQ starts with a fast 144Hz TN panel like the one in its XL2430T, and then adds a G-Sync module. But it’s not just an extra board. This is a true hybrid display with completely independent modes called (appropriately) Classic and G-Sync.

At its heart, the XL2420G is similar to competing screens; it sports a 24-inch white LED-backlit panel with eight-bit color depth courtesy of frame rate conversion. The similarities end there, though. Rather than simply adding G-Sync functionality to an existing design, BenQ implements a separate menu system and even omits the DisplayPort input from Classic mode. With an HDMI connection, you get a color-accurate and bright display with a 60Hz refresh rate, along with plenty of picture modes and gaming features. It works equally well as a general-purpose monitor and as an enthusiast's tool for titles that don’t require speed or the elimination of tearing.

When you get more serious about gaming, however, the Engine Switch option takes you to G-Sync mode and the DisplayPort input, where you can adjust the XL2420G independently of Classic mode and crank the refresh up to 144Hz. You also get variable pulse-width blur reduction thrown in the mix.

Although this sounds a little overwhelming, we're here to help sort the XL2420G out for you. We’ve never seen a design quite like this before. But after spending some quality time testing and playing on it, we’re confident we have it figured out. Once you read the rest of the review, you’ll see that this is a unique and interesting piece of display technology. Let’s take a closer look.

Next Page Packaging, Physical Layout And Accessories
28 Comments Comment from the forums
Be In the Know