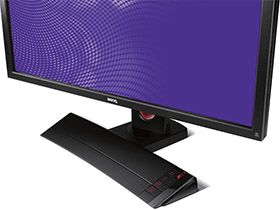 For a display to truly be classified as a gaming monitor, it must be able to run at high refresh rates. With high-end graphics configurations topping 100 FPS in demanding titles at the most taxing detail settings, competitive gamers need panels able to keep up. G-Sync holds a lot of promise by matching the input and output frame rates, but compatible displays are only just now starting to trickle into the market. We expect to see a few press samples soon.

If you need a gamer-oriented screen today, your best bet is one able to refresh at up to 144 Hz. We tested Asus’ VG248QE back in the fall and concluded that it offered fantastic speed, along with surprisingly good contrast and color accuracy. Today, we continue our inquest by reviewing BenQ's 27-inch XL2720Z.

There are a couple of features worth mentioning that are not part of the specs. The first of these is Flicker-Free, which is BenQ’s term for an LED backlight that does not use pulse-width modulation. Most monitors reduce their output by cycling the backlight at high frequencies, as high as 20 kHz, in fact. This can sometimes manifest as flicker to more sensitive users. The two ways to combat this problem are to increase the PWM frequency or power the backlight with direct current, as BenQ does. Voltage is kept constant and the backlight is not cycled, regardless of brightness setting, so flicker is not possible even at minimal levels.

The second major feature is Blur Reduction, BenQ's marketing term for backlight strobing. Functionally, it operates like Nvidia's LightBoost technology whereby the backlight is turned on and off between frames to minimize the blur inherent to sample-and-hold display technology like LCD. Since it’s now built into the monitor, you can use it with any graphics card, not just one that’s LightBoost-enabled. Without Blur Reduction, each frame of the image stays on-screen until the next frame is rendered. This is different than CRT or plasma displays that actually go dark between frames. Of course, it’s all happening 60 times per second or more so your eye shouldn't perceive the flicker. Instead, you get smoother motion resolution. The main side-effect is a reduction in light output. But there is a solution in the form of a third-party utility we included in our testing. For the rest of that story, see page nine.

Like Asus' VG248QE and other high-speed monitors, the XL2720Z is a twisted-nematic (TN) panel. In-plane switching (IPS) and its variants have made major strides in most areas of image quality, but speed is not on that list. Today’s reality is that if you want fast response and low input lag, you have to use TN.

The second part of the speed equation is bit-depth. This BenQ monitor uses an AU Optronics six-bit native panel with a frame rate conversion algorithm to create a perceived eight-bit output signal. In practice, it works extremely well. We talked about the banding artifacts that can result from signal compression in Asus VG248QE: A 24-Inch, 144 Hz Gaming Monitor Under $300. We didn’t see any on that display, nor did we see any on this one. By using a six-bit panel, both response time and input lag are significantly reduced.

BenQ includes several more goodies in the XL2720Z that cater to gamers. Let’s take a look.

Next Page Packaging, Physical Layout, And Accessories
39 Comments Comment from the forums