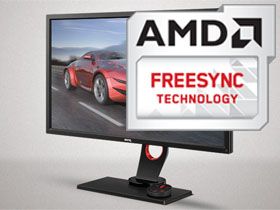 For a first-generation product, BenQ has checked every box except panel technology. We’d prefer an IPS panel but with its other performance virtues, the XL2730Z is a winner in our opinion. It’s not cheap but once you’ve experienced the frame-rate matching offered by FreeSync, you won’t care how much it costs. AMD users finally have their solution and it’s a good one.

Last August we got our first look at a G-Sync-capable gaming monitor – the Asus ROG Swift PG278Q. By matching incoming frame rates to the monitor’s refresh cycle, stuttering and tearing from moving images is eliminated. It was quite an eye-opener to see it in person after so many simulated demos had circulated online.

Of course G-Sync requires not only a compatible monitor but also a modern GeForce GTX graphics board. That shuts out a legion of AMD users (and even a lot of Nvidia owners) from this slick new tech. FreeSync, added to the DisplayPort standard as Adaptive-Sync, was announced at about the same time as G-Sync and held great promise. As part of DisplayPort 1.2a, it would not require an additional PCB in your display. It would simply be there waiting to connect with the right video card and driver set.

Blur-reduction is standard fare on pretty much every gaming monitor these days. It’s accomplished by scanning or strobing the backlight between frames. LED’s super-fast response allows this to happen. The big differentiator between products is how much their light output is affected. The amount of time the backlight is actually on determines how much brightness there is. And it’s a Catch-22 proposition. If you want less blur, you have to keep the backlight off for longer.

Some monitors take a large hit to output with blur-reduction engaged (on the order of 65 percent or more). Unless you’re starting with a 450cd/m2 panel, this makes for an extremely dim picture. Better displays include a pulse width adjustment that lets you determine how much output is reduced. BenQ does a superb job in this area. The XL2730Z has one of the best-implemented versions we’ve seen yet. Even on its lowest setting, the blur-reduction improves motion resolution while only dropping output by 35 percent.

Of course there are plenty of other features to talk about, not the least of which is FreeSync. We’ll check that out on our newly-upgraded test system with the latest AMD Catalyst drivers. Page three has instructions on how to enable the technology and page eight has the results of our motion resolution tests. Let’s take a look.

Next Page Packaging, Physical Layout And Accessories
37 Comments Comment from the forums
Be In the Know