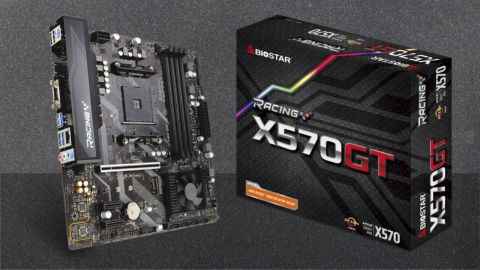 In our synthetic set of tests, the Biostar X570GT8’s results were right in line with the other X570 motherboards. All results were within general run variance difference with no anomalous data points. We didn’t test PBO separately here, as this board appears to have PB enabled by default.

Game results continue to show a very tight set of results without any appreciable differences with the Biostar right in the middle of our data points. Nothing to worry about here.

Our timed applications also show little difference between the boards. In this case, the Biostar seemed to be just a hair slower in Corona and Handbrake, by a couple of percent.

Overall, the Biostar X570GT8 performed well across the board. It was only in the timed application benchmarks where it showed almost a 2% difference. Users would be hard-pressed to notice such a small difference, but it is measurable.

For power use, our Biostar used the most power under load, hitting 153W (3W more than the next highest), but showed decent idle power consumption (note this is still with the older chipset drivers -- some improvement is said to come with the latest that was released the day after I finished this review. According to our results, the X570GT8 was 3.2% less efficient than the other boards/datasets when taking performance into consideration. But that’s still a fairly minor difference.

Overclocking on the X570GT8 gave us a flat 4.0 GHz overclock with 1.29V on the core. That speed is less compared to both of the other boards by that .25 multiplier. No matter what voltage I used, I was not able to stabilize (get through a 30 min AIDA run) at higher speeds. Even with the better cooler and lower temperatures.

We successfully loaded up our GSKill Trident Z Neo 4x8GB DDR4 3600 16-16-16-36 sticks without issue here as well. What’s interesting is the motherboard set it to 1:2 ratio at this clock speed, which is lower than AMD specifies should be a 1:1 ratio. That said, switching the FCLK to 1800 MHz getting back to the 1:1 ratio proved to be stable. So it just took a little manual fiddling it to get there. At times we’ve seen some setups drop to 1:2 for stability and compatibility purposes, which is likely what happened here.

Overall, the board clocked well, though it could not reach quite the same level as the other boards tested recently. Even when using the same voltage or more than the other boards used, the Biostart just wouldn’t stabilize and errored out in testing. Perhaps a BIOS update will improve this result.

The Biostar X570GT8 ($230 MSRP) went through all of our testing and showed that it can hang with the other X570 boards I have reviewed so far. On the features side, we like the inclusion of three M.2 slots, but the icing on the cake on that front is that they all have heatsinks, which is something you don’t typically find in this price range. Due to the number of M.2 slots, Biostar chose to run with six SATA3 / 6 Gbps ports, avoiding any lane sharing if all three M.2 slots or all the SATA ports are populated. The board has a USB 3.1 Gen 2 Type-C port on the back as well, which is hit or miss in this price range.

Our overclocking adventure proved a bit disappointing, as we were not able to reach the 4.24 GHz here, which we saw on competing models. We were, however, able to set our 32GB DDR4 3600 memory kit to its XMP settings, but the board dropped the ratio to 1:2 by default. This wasn’t a big deal though, as all it takes is setting the FCLK to 1800 Mhz to match and get back to 1:1. Perhaps with further BIOS refinement we will see improvements on the overclocking front. The transparency issue in the BIOS making things a bit hard to discern was a bit confusing at first, as was the memory ratio dropping earlier than expected. But once we got used to how this board rolls, we were able to do most of what we expected with relative ease.

Overall, the Biostar X570GT8 shows promise and is a solid choice for an entry-level board, with a little extra. All the basic needs are met and it excels at M.2 storage, although Wi-Fi isn’t included. So if you need that feature at around this price point or a little less, consider the Asus TUF X570-Plus Wi-Fi instead. Outside of that, it’s tough to pin down a winner between these three budget boards as they all have their positives and negative points. But if you are looking for a board that has three heatsinked M.2 slots at a very reasonable price, the Biostar X570GT8 is easy to recommend.