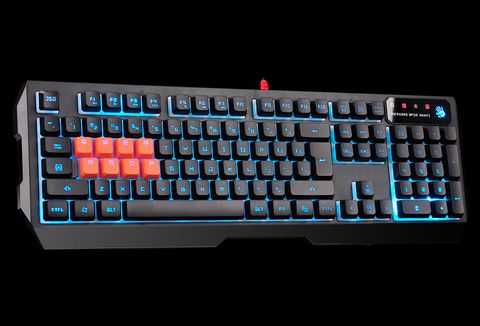 A great idea executed poorly, the B188 should probably be ignored either for a fully optical keyboard, or simply a keyboard from another manufacturer.

Bloody is the key brand of A4tech, a Taiwan-based peripherals manufacturer seeking to innovate in the gaming market with mechanical keyboards based on optical switch technology called “Light Strike” (LK Optic 1). It’s these Light Strike switches that are the main unique selling point of these keyboards.

Although optical switches aren’t new (Burroughs used them all the way back in the 1980s) their resurgence with these keyboards are an interesting re-introduction of the optical keyboard switch. Although quite simple in construction (an infrared LED and photoresistor separated by a movable view blocker between the two), such a type of switch offers several inherent advantages.

The Bloody B188 is one of the lowest-priced models in the company’s extensive keyboard range. This budget version is a stripped-down model with limited three-color backlighting, and crucially, Bloody’s proprietary optical Light Strike switches on just eight keys (QWERASDF). The rest of the keyboard has rubber domes (non-mechanical). The idea behind this is obviously that gamers who don’t care too much about all the bells and whistles can still enjoy the technology where it benefits them most - around the WASD cluster.

Unfortunately, in a bid to appeal to the (nowadays highly lucrative) gamer market, Bloody has gone rather over-the-top with its advertisement of its products, using aggressive marketing buzzwords and misleading, unsubstantiated, or even outright false claims. We have discussed these issues extensively with Bloody, but even so, not all our questions could be answered, and some answers were conflictive or demonstrably untrue.

This is unfortunate, especially because the Light Strike technology is actually quite appealing and has several key benefits, which are being mis-advertised by overly aggressive marketing.

Aside from the Light Strike switches, the B188 also includes a gaming lock; the aforementioned three-color backlighting; and textured, high-grip QWERASDF keycaps - all of which to appeal to the gamer market. Media shortcuts are also available, and there’s an included ring keycap puller. It also has rubber-coated feet to prevent the keyboard from slipping.

The Bloody B188 comes in an ISO international layout, which is a hybrid between the U.S. and UK layouts.

Next Page Debunking Switch Claims
10 Comments Comment from the forums