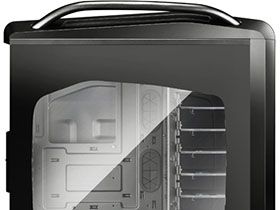 Until now, Cooler Master’s Cosmos line consisted exclusively of full-tower PC cases that distinguished themselves with sharp design elements and a lot of features. Great build quality wasn’t the only attribute landing Cosmos products in the high-end space, though. Prices from $250 to $400 for an enclosure made of steel, plastic, and in some cases aluminum certainly fit that category as well.

The Cosmos SE is the smallest offering in this line-up, and its family resemblance is immediately apparent. Nevertheless, it offers the same ostentatious curvy shape and carrying handles, supposedly able to support an entire system's weight.

Given that already-successful foundation, it's no surprise that the Cosmos SE gives off a good first impression. Cooler Master is clearly aiming for the upper echelon of buyer looking for high quality, but in a smaller form factor. That means this case exists in a more rarefied space than the company's own HAF portfolio.

There are currently two different versions of the Cosmos SE, both of which come in black. The first one has a side window, while the other sports mesh instead. We received the former for review.

What we want to know is just how much of that Cosmos DNA can you really cram into a $170 case? At least on paper, the prognosis is promising. You get enough room for up to eight hard drives or 16 SSDs, while 120, 280, and 360 mm radiators all fit at the same time (around back, up top, and in front, respectively). The case also features large and easily removable dust filters, along with blue LED lighting just waiting to illuminate your enthusiast-oriented gear.

The Cosmos SE’s packaging doesn’t rip easily due to its coating, and can consequently be reused to transport the case.

Cooler Master's box includes the expected assortment of screws needed to fill the chassis up with hardware. All of them (except for the motherboard spacers and the tool to install them) are black. The bundle also includes a number of cable ties, as well as eight rubber dampening pads and matching screws for installing two fans on the back of the hard drive cages.

The bundle is rounded out by an optional fitting for a security lock on the side of the case, a piezo speaker with a very long cable, and two large holders for a front-mounted radiator (which we'll talk about later). The manual explains the steps you'll follow in order to install various components. And it covers the case's less common features in sufficient depth, with clear and detailed illustrations.

The Cosmos SE's front-panel connectivity is actually on top of the case. You get two USB 3.0 and two USB 2.0 ports, along with headphone output and microphone input. The audio I/O can be hooked up to your motherboard's AC'97 or HD Audio header.

The power and reset buttons are further back, behind the top ports and jacks. In addition, there's a button for turning the LED lighting on and off. All three provide a nice tactile feel, which I really like.