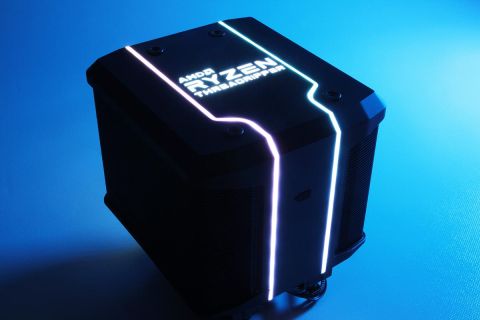 All (impressive) appearances aside, the Wraith Ripper struggles to restrain temps from our 32-core 2990WX clocked at 3.4Ghz and 1.20v compared to other large heatpipe coolers designed for AMD’s flagship CPUs. This despite a $120 price that puts it in liquid-cooler territory.

Cooler Master’s generously-sized Wraith Ripper is a monstrous, seven-heatpipe cooler designed specifically to sit atop AMD’s high-end desktop (HEDT) Threadripper CPUs, which we first saw at Computex 2018. The beastly air cooler is designed as an alternative to more-common liquid cooling solutions, providing thermal relief for the potentially dozens of cores churning below it. Its appearance might also suggest the Wraith Ripper could double as a containment unit for tiny black holes, and its heft seems to promote this theory. The unit tips the scales at a substantial 3.6 lbs (1.64kg). In other words, the monolithic Wraith Ripper presents itself as a sinister, futuristic engine dedicated to obliterating large thermal loads.

Cooler Master ships the Wraith Ripper with minimal components, since it’s a purpose-designed cooler for AMD Threadripper, and Threadripper alone. There's no need for hardware designed for other sockets. Integrated hardware mounts mounts also means there are no boxes and bags full of mounting hardware, brackets, backplates and machine screws.  The only accessory is a USB cable with a proprietary mini-connector for the front of the cooler, with the end meant to fit a motherboard’s internal 9-pin USB header.

The 120mm fan is rated up to 2,750 RPM and is hidden deep within the heart of the Wraith Ripper’s cooling tower.

The front of the Wraith Ripper houses a tiny USB header for accepting the proprietary connector used to sync the RGB lighting of the cooler. The port comes plugged with a rubber port protector until you’re ready to make the connection to your motherboard's USB header.

Cooler Master provides a link in the installation manual for its graphical UI, which must be downloaded and installed to access the lighting customization options. The center panel and each lateral seam can be independently defined with varied lighting and color patterns, or you can choose from several pre-defined options in the software. The Cooler Master software only provides support for the Wraith Ripper’s lighting at this time, so don't expect to use it to sync with other RGB hardware.

Cooler Master ships the Wraith Ripper with a pre-applied layer of thermal compound to simplify installation.  The compound is protected by a plastic shield covering the bottom of the cooler and mounting pegs, to prevent displacement and disturbance of the interface material.

Taking a closer look at the Wraith Ripper’s base with the thermal compound removed, we are met with a highly reflective and mirror-smooth finish to the milled heatsink base. Integration of the heatpipes into the base provides a firm support of the cooling tower, with the integrated mounting system meant to mate with the native TR4 socket threaded mounting anchors.

With a tall base clearance (1.88" / 47.75mm), the Wraith Ripper stands high above nearby memory DIMMs and heatsinks, limiting compatibility concerns will all but the tallest of modules. Installation is as simple as aligning the four machine screws into the four anchor sockets of the motherboard and torquing down the Phillips-head screws from the top of the cooler, as the mounting bolts run from the top face of the cooler down into the base, making it one of the simplest Threadripper coolers we’ve ever installed.

As we’ve mentioned before, the Wraith Ripper is heavy for a cooler, so significant care should be taken when moving or transporting any build featuring this monstrous heatpipe cooler.

Next Page Testing Results and Conclusion
Be In the Know