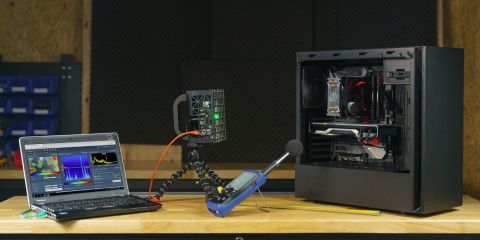 We tested the Cooler Master Silencio S400 with our Intel Core i9-7900X test platform in two configurations: fans in default placement and both fans mounted in the front of the chassis. For comparison, we brought in the Antec P101 Silent, Corsair's Carbide 678C, and the be quiet! Silent Base 601, all with similar sizes and feature sets.

As always, sound pressure level readings were taken with two off-the-shelf dB meters from two different angles. With the fan speed set at the maximum 1,400 rpm, our test system registered just 28.5dBA at idle. With the test system under load, sound output reached a maximum of just 30.1dBA, the best results of the test group. Oddly enough, running the tests again with the exhaust fan moved to the front produced almost identical results. This no doubt is due to the design of the chassis and abundance of sound damping material.

Cooling efficiency and noise levels are both important to enthusiast when determining the base value of a chassis. Normally higher temps would be a negative, but the ability to achieve lower temperatures simply by moving the rear fan to the front (without a negative impact on sound output) alleviates the issue.

If you value silence above all else and are willing to sacrifice cooling performance (or able to do a simple fan swap), the Cooler Master Silencio S400 should definitely be at the top of your case consideration list. The chassis' budget-friendly $90 (£80) asking price makes it easier to forget drawbacks such as lack of USB 3.1 Type-C port, not to mention leaving money on the table for an extra intake fan if you want to drop your temperatures further.