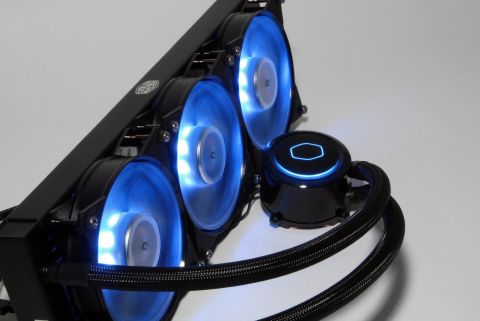 Result data taken from our overclocked hex-core, Intel Core i7-5930K at 4.2Ghz and 1.20v on our MSI X99S XPower AC motherboard provided plenty of thermal load to push the limits of the CPU cooler.

The MasterLiquid ML360R RGB turned in the lowest thermal load temperatures over ambient of the comparison group. The Kraken X72 trailed close behind at just over 3 degrees Celsius at full fan speeds, while the H150i Pro and ML240R lagged further behind.

Not surprising, both the ML360R RGB and ML240R RGB aligned nearly perfectly in terms of fan and pump RPM (revolutions per minute) due to the identical hardware in each cooler. Oddly enough, similar comparisons can be made between the Kraken X72 and the H150i Pro as their pumps have historically shared similar lineage.

Faster fan speeds almost always lead to higher registered noise levels, and we saw no surprises on that front here. While the smaller MasterLiquid ML240R RGB shares the same pump and fans as the larger ML360R RGB, the difference of a single fan provided interesting scaling in measured decibel levels.

While it provided the best cooling of the bunch, the MasterLiquid ML360R RGB also has the loudest fans of the quartet. However, relatively speaking, any large 360 AIO wielding three 2000+ RPM fans is doing quite well when staying under the 40-decibel ceiling.

With a retail price of $160, the MasterLiquid ML360R RGB sits exactly at the group average cost, meaning the acoustic efficiency chart almost exactly mirrors our performance value table. The price premium of the Kraken X72 overwhelmed its overall performance, while the H150i Pro is neither here nor there. The smaller MasterLiquid ML240R RGB made a very strong overall value statement when compared with the larger 360 coolers.

Comparing thermal images from our FLIR ONE Pro camera shows two very similar tales for the MasterLiquid ML360R RGB. Slight differences in heat signatures seen in the tubing lines and around the perimeter of the pump housing as well as the radiator are the only indicators between full- and half-speed fan settings. Remember, the cooler pump speed was always maintained at 100 percent, so the only variable here is the RPM of the cooling fans and airflow over the radiator.

Cooler Master’s MasterLiquid ML360R RGB is an impressive attack against the 360 AIO competition, but it shouldn’t be much of a surprise if you’ve read our recent review of the MasterLiquid ML240R RGB. The true shock comes from the thermal load performance delta (and price) between the ML360R RGB and others in the current 360 AIO category. Meanwhile, the addressable RGB lighting provides vivid aesthetics, and the overall design is discreetly handsome.

The only real negative for the ML360R RGB is the number of cables necessary to set up and manage the lighting with the included controller or software. The RGB pin connectors also don’t make very secure contact between the cabling and the control unit, and we actually needed to knot the wires to prevent gravity and the weight of the 5-headed splitter from pulling the connections apart.

There’s just a lot going on with this cabling setup, and if you're a cable management perfectionist, you might get a bit of anxiety just looking at the number of connectors and wiring involved.

Power users, gamers, system builders and overclockers in the market for a new large CPU cooler should take note. The Cooler Master ML360R RGB is our current 360 AIO thermal performance leader. And while $160 isn’t exactly cheap, there are plenty of competing products that cost more while delivering less-impressive performance.