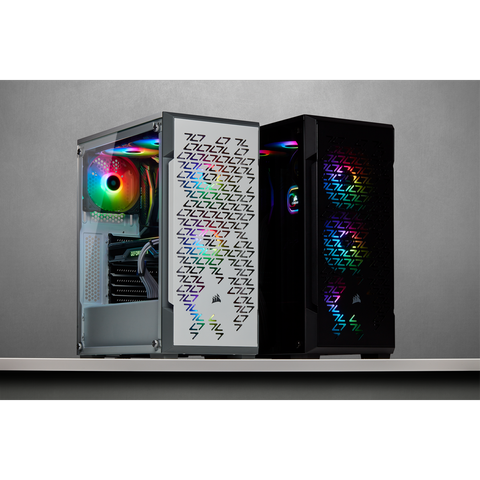 Once the build is finished, the whole thing does come together rather well. But at this point we’ve lost those three RGB intake fans shining through Corsair’s latest aesthetic design piece, have no access to those two 3.5-inch drive bays, and have had to compromise on our GPU length entirely. That said, it’s still a very clean looking build, one that’d look right at home on any the desk of any gamer or enthusiast.

Now that our AIO build is out of the way, it’s time to get down to the thermal performance testing. For this we perform two rounds of tests.

The first set of benchmarks take advantage of an air tower (notably Noctua’s NH-U12A), equipped with 2x Corsair ML120 Pros. This allows us to keep the included case fans in their factory installed locations during testing, without running into compatibility issues, and is an ideal insight for those looking to just plug and play their kit into the case.

The second set of benchmarks utilize what we consider to be the most optimal installation setup when it comes to both the included chassis fans, and a 240mm AIO liquid-cooler. The cooler again featuring those same 2x Corsair ML 120 Pros. This way we can showcase just what each chassis is capable of in a “best-case” scenario, without necessarily investing in additional fans, just purely by moving the ones provided around inside with the help of an AIO.

In our optimal testing, the Corsair 220T RGB Airflow is nothing if not impressive. Using our Intel Core i9 test bed, at the end of our stress test we noted max temperatures of 74 Celsius on the GPU and 60 Celsius on the CPU.

Compare that to the stock tests, and you’ll quickly see that’s a loss of 9 degrees C on overall CPU temp, compared to running the internal fans in their stock position, and only an increase of one degree on the GPU. This is no doubt in part due to the fact that those twin static-pressure-optimized fans are drawing cool air straight in through that front panel and into the radiator, before distributing it around the rest of the chassis in a far better manner than their stock cousins, which have now been relegated to exhaust duty.

What’s impressive is the GPU temp only increases by a single degree when running the case in this setup, despite the cool air being heated by the radiator first and pumped in via two fans instead of 3. Having those front 3 fans acting as an exhaust now helps here too, naturally drawing hot air up and out of the case, through a simple magnetic dust filter and perforated top.

Ultimately, if you can live with the internal space issues you might encounter when building in this thing, whether you’re using a stock fan and air-tower setup or a 240mm AIO, you’re going to be happy with the end result.

The case isn't perfect. There are certainly teething areas here and there, and we’d love to see a more premium variant, complete with a better finish throughout. And those with mid-to-large radiators might want to look elsewhere given that you'll have to house your 240mm radiator up front, and a 360mm cooler would be a tight fit. However, for those looking for a compact mid-tower chassis for a moderate build at a reasonable price, the Corsair 220T RGB Airflow is well worth considering.