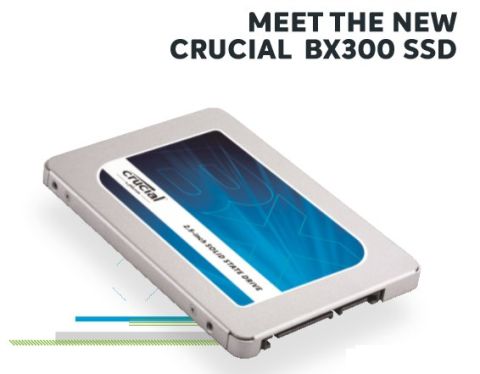 We have the two high-capacity BX300 drives in the lab for testing. We begin with the larger 480GB drive that competes in the 512GB-class. This is the most relevant SSD for most of our readers due to the enormous size of modern games and other applications.

As usual, the Samsung 850 EVO is the dominant product in this category, and it features the same $149.99 price as the BX300 480GB. The Sk Hynix SL308 is a close second. We don't have the Western Digital Blue 3D or SanDisk Ultra 3D in this capacity yet, but we expect to test those products soon.

The other comparison products, including the Crucial MX300, were never very competitive in the market. Some SDDs cost more than the industry-standard 850 EVO, while others deliver less performance. In many cases, both are true.

Most of the products deliver over 500 MB/s of sequential read performance. The MX300 is the only SSD we've tested over the last five years that failed to meet this goal at a queue depth (QD) of 2. Crucial didn't make the same mistake with the BX300. The drive rockets up to 514 MB/s at QD2 and joins the other products as we increase the workload.

The BX300 performs exceptionally well in the sequential write test. The drive leads all others, including the 850 EVO 500GB that now looks vulnerable to products shipping with new 3D NAND technology.

The BX300 480GB doesn't hit the 10,000 IOPS at QD1 that we like to see with new products. The drive isn't far behind though, and it scales well as we intensify the workload.

The random write test reveals nearly identical performance between the BX300 and the 850 EVO. The two SSDs trade positions on each step up the scale.

In this test, we use an 80/20 mix of 128KB sequential write data. The BX300 dominates the performance chart until we reach the top of the QD range.

We use the same mix with random 4KB blocks to test mixed random performance. The BX300 performs well, but it falls a little short of the 850 EVO.

We wish our WD Blue 3D 500GB drive were here to compare to the BX300. The Blue 3D 1TB version with the latest version of SanDisk's BiCS NAND delivered very good performance in this test.

We test the drives in a steady state, which is a reduced performance state due to heavy activity. The results show the BX300 may be a good fit for video editing. We'll examine steady state performance more in depth later in the review.

In this test, we fill the usable capacity with random 4KB data and then continue to write to the drives. The Crucial BX300 480GB has a high average score, but it isn't consistent.

The BX300 480GB doesn't overtake the 850 EVO, but it is very close in most of the timed tests. It would be difficult for users to tell the difference between the two during a normal workload.

The BX300 splits the gap between Crucial's MX300 525GB mainstream SSD and the Samsung 850 EVO 500GB. That's the magic of advanced cache. Now we just need Crucial to work some magic on pricing and endurance.

The BX300 features a very advanced cache system that allows the drive to perform well during heavy workloads. The BX300 480GB is in a class of its own during the heavy portion of the PCMark 8 Extended test. We introduce some idle time for recovery, but the BX300 doesn't recover to the same performance we recorded before the heavy workload. The drive likely just needs more time than the test allows. It does recover much better than many of the other SSDs, but it still lags the industry leader.

It’s surprising to see the BX300 480GB perform as well as it does. The SMI SM2258 controller has fewer cores than the 850 EVO and Micron's first-generation 3D NAND, even the MLC variant, hasn't impressed us.

With that said, the BX300 480GB keeps pace with the Samsung in all of our performance tests. These two drives are nearly equal, and that's a big step forward for Crucial.

In this test, we move the drives from our flagship desktop to a Lenovo Y700-17 gaming notebook to experience performance in a more modest system. The BX300 480GB requires more power to stay within a few responsiveness points of the class leader.

The extra power consumption leads to only a six-minute difference in our notebook battery life test. The Lenovo Y700-17 gaming notebook has less than five hours of battery life from the factory. We manage to give the system more life under battery power simply by changing the storage device.