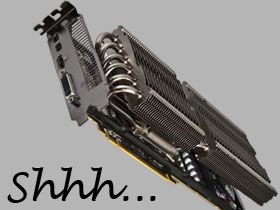 One of our biggest complaints about AMD's Radeon HD 7970 GHz Edition is the card's noise under load. Its radial fan is loud enough to drive anyone who cares about acoustics insane. Particularly compared to the GeForce GTX 600-series cards that were already available, we're surprised that AMD didn't put more effort into improving its reference design. Fortunately, we've seen a number of board vendors implement their own aftermarket coolers to solve the reference board's noise problem.

It'd be laborious to do all of that work yourself. It'd cost a lot of money. And you'd void your warranty. But it seems like a better idea every day we have to hear our Radeon HD 7970 cards whirring away.

Rather than go the conventional route, with a two- or even three-slot cooler, we're taking Radeon HD 7970 cooling to an entirely different level.

Our installation requires three things to be successful: the right parts, five free expansion slots, and some patience and care. There’s no need to be afraid of dismantling your expensive new card, even if you've never done something like this before, so long as you follow our instructions. Just don’t expect a lot of help from the manual included with the heat sink we're using, the Alpenföhn Peter from cooling specialist EKL. You'll also find the Peter sold as Deepcool's Dracula here in the U.S.

By all accounts, this thing is a beast. And we're using it with modifications for AMD's Radeon HD 7970 GHz Edition in the form of new brackets and two Noiseblocker BlackSilentPro fans. All of this can be had for about $140 through a couple of different enthusiast-oriented online vendors. That's not cheap my any measure, but you get a lot of technology for the price.

Next Page The Heat Sink And Fans, Detailed
60 Comments Comment from the forums