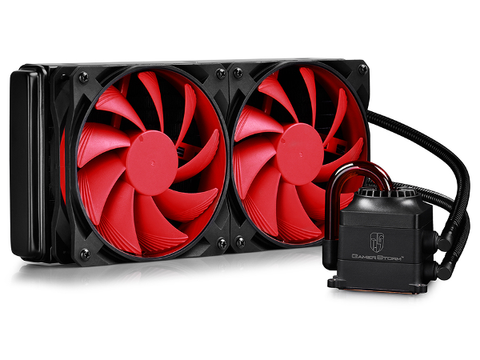 Regardless of whether you call its brand Deepcool or Gamer Storm, the Captain 240 produces slightly lower temperatures than its most closely-sized competitor, at a far lower price, and with far greater noise. In fact, it produces more noise in low-speed mode than that competitor produces at full speed. There must be an advantage somewhere though, right?

An actual price reduction of nearly 24 percent allows the Captain 240 to gain a one percent performance-per-dollar advantage over its high-end counterpart. We need to look at NZXT’s larger radiator and fans if we want to find a liquid cooler with enough of a performance advantage to gain the upper hand in value. Unfortunately, many cases don’t support NZXT’s two-by-140mm configuration.

We could talk about the elephant in the room, Noctua’s NH-D15. Speaking of elephants though, that big air cooler hangs nearly three-pounds of metal off the CPU socket. Though I still use big air in my immobilized office machine, that’s just a little too much heft to be moving around in such an insecure manner. We’ve broken a few boards that way.

Weight is the biggest reason any of us would choose a mid-sized liquid cooler over big air. Sure, there’s also more space around the CPU socket to install and remove memory, but heft is the thing that weighs on our minds. The Gamer Storm Captain 240 by Deepcool is both light on the socket and light on the wallet.

Thomas Soderstrom is a Senior Staff Editor at Tom's Hardware, covering Cases, Cooling,Memory and Motherboards. Follow him on Twitter.