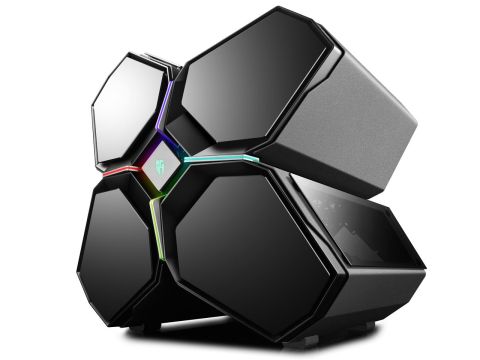 The Quadstellar is an uniquely impressive chassis that caters to high-end builders with discretionary income. Without any mods or add-ons, is the perfect showcase for system builders, gamers, and enthusiasts.

Deepcool is primarily known for its line of CPU air coolers, all-in-one liquid CPU coolers and power supplies. Although not as well known in the US as companies such as Thermaltake or Corsair, the company has branched out into consumer electronics, cooling fans and computer cases. The latter is what brings us here today.

Deepcool’s successor to the its massive Tristellar Mini-ITX case, appropriately named the Quadstellar due to its four separate component compartments, is a unique beast in every sense of those words (both unique and beast). Measuring 483 x 493 x 538mm (W x H x D) and tipping the scales at almost 34lbs empty, the word "beast" definitely suits this chassis.

The four-lobed compartmentalized design of this case is unlike any computer chassis you've ever seen before, which is why "unique" is such a fitting description.

Starting at the front of the chassis, the Quadstellar features a powder coated front panel frame constructed of cast aluminum. There are four plastic panels, one for each compartment, that can be opened to allow more airflow into the chassis. The panels are controlled via the accompanying Quadstellar app and can be set to open automatically or controlled directly from the app. Unfortunately, the panels do not have the option to be opened manually. This seems to be a bit of an oversight. The large diamond shaped button at the center of the front fascia is the power button.

The leading edge of the upper left lobe of the front section is home to two USB 3.0 ports and the headphone and microphone jacks. Inside this compartment you will find hard drive mounting locations with plastic drive caddies. The upper right compartment is equipped with mounting locations for a graphics cards or water cooling components. The lower right hand lobe of the chassis acts as the motherboard chamber. The lower left lobe is the PSU compartment. We'll go into more detail of these sections later in this review.

All four lobes of this chassis are equipped with tempered glass panels that attach to the frame via powerful magnets, and metal covers that slide off from the rear and are held in place by thumbscrews.

Around back you'll find an opening for a bottom-mounted PSU, eight standard expansion-card slots (plus six vertical ones in the upper right hand compartment for video-card mounting), and an exhaust-fan mounting location in the upper right hand compartment. There are four large rubber feet that keep the case approximately half an inch off the ground.

The Deepcool Quadstellar is equipped with a very nice fan filtration system. Every intake fan mounting location in the front of the chassis is equipped with a large nylon filter. Accessing these filters requires using the app to set the front doors into the open position. There is also a large filter located in the motherboard cabin as well.