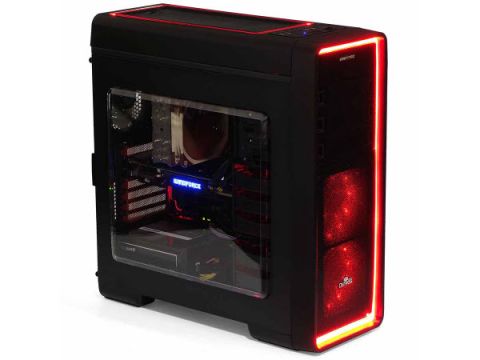 The Ostrog ADV includes four radiator screws, a PC speaker, and several cable ties in addition to the expected M3 and #6 case screws.

The Ostrog ADV’s 11.7” of clearance is barely enough to fit the slightly oversized GTX 970 in today’s test, but that same clearance also allows it to fit a wide range of ~10.7” premium-priced enthusiast motherboards that most manufacturers lazily refer to as “EATX.” Full EATX boards (13”-deep) won’t fit however.

While the lights aren’t excessively bright, capturing the true redness of the LEDs was difficult, because alternative camera settings caused the darker components to fade into the shadows.

We haven’t tested an inexpensive bay-filled case in a couple years, so the Enermax Ostrog ADV is instead compared to our closest-matching, less-filled cases using our standardized hardware configuration. The Raidmax Alpha has only one external bay but adds RGB lighting control, the Z9 Neo has fewer lights and two external bays, and the MasterBox 5 has no lights and two places to add external bays.

High temperatures for the Ostrog ADV were tracked down to an exhaust fan that, while moving at normal speed, didn't feel like it was putting out much air. Turning down the fans to "medium" caused the expected temperature increase, and the "low" setting forced thermal throttling regardless of ambient conditions.

Regardless of its poor thermal performance, the Ostog ADV wasn’t able to advance in noise testing. Further examination revealed that the air simply wasn’t moving efficiently through the drive cages and out the exhaust fan. People who already own the case and have attempted to install hot hardware may find an airflow benefit by removing the center drive cage.

A combination of high heat and high noise push down the Ostrog ADV’s cooling-to-noise ratio.

Unfortunately, the price isn’t even low enough to put the Ostrog ADV ahead in our value calculations. Buyers must truly require its extra drive bays to justify its purchase.

Many of our readers aren’t using any kind of LGA 2011-v3 processor, let alone one that’s been overclocked, and we can’t tell anyone running cooler hardware to scratch the Ostrog ADV from their list. However, our tests have a significant performance component that prevents it from winning any awards.