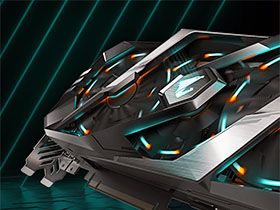 Gigabyte bundles the Aorus GeForce RTX 2080 Ti Xtreme 11G with its own utility for overclocking and fan control. The latest version of this software, called Aorus Engine, was 1.50 at the time of writing.

Unlike some of the lower-end cards, this flagship-class model didn’t present us with a simple interface for toggling between OC, Gaming, and Silent modes. Instead, we were ushered directly into Aorus Engine’s Professional mode with access to GPU Boost control, a memory clock rate slider, GPU voltage adjustments, a manual fan speed dial, and linked power target/temperature target sliders. Maybe that’s because Gigabyte doesn’t specify any mode beyond the Xtreme card’s 1,770 MHz default core clock rate.

The Professional mode provides access to an Auto Scan button that leverages Nvidia Scanner functionality to tune the voltage/frequency curve. Although the feature completed its scan on our test bed, it didn’t seem to make any changes to the Aorus GeForce RTX 2080 Ti Xtreme 11G’s GPU Boost frequency. So, we fired up EVGA's Precision X1 tool and scored a +112 after increasing the power target/temperature limit. The resulting performance was about 2 percent higher through our Metro: Last Light benchmark at 2560 x 1440, and 8 percent higher compared to Nvidia’s Founders Edition card. This is the approach we recommend taking for overclocking Turing-based cards.

We also took some time to play with Gigabyte’s new RGB Fusion 2.0 app, which looks a lot like the previous version of RGB Fusion but adds the ability to control compatible hardware devices from a single interface. Clearly, Gigabyte is going after Asus’ Aura Sync ecosystem with this latest release.