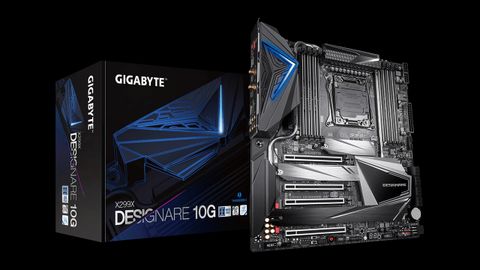 Gigabyte EasyTune lets you adjust CPU frequency and voltage levels within Windows, and even has a programmed overclock and an auto-tuning algorithm. Unfortunately for Gigabyte, those “easy” overclocks did not produce stable results in our stress tests.

After running a lengthy fan-tuning session upon first launch, Gigabyte SIV becomes a reasonable utility for tracking system stats and changing fan settings. Users can even choose their own monitoring alerts and log system readings, if they’d like.

RGB Fusion 2.0 reads the RGB controllers of our memory and graphics card as well as the motherboard. These can set to various pulsating patterns and colors in full synchronicity, but nothing so complicated as a rainbow pattern is available. Furthermore, at least in our test rig, once you close the window, synchronization is lost.

X299X Designare 10G firmware opens to an Easy Mode GUI, which limits user interaction primarily to settings that aren’t difficult to recover from. Anyone who really wants to push their hardware must first gather the courage to press the “F2” key at the top of their keyboard.

Once inside Advanced Mode, users can play within the Tweaker menu to their overclocking heart’s delight. Thermal issues prevented us from using more than 1.25V CPU core with our Core i9-10980XE on any motherboard, and we found that the roughly +5v bias on the board’s front bank of memory was roughly +15mV on the rear.

Speaking of memory, the X299X Designare 10G offers users a peak at module programming, along with a comprehensive set of primary, secondary, and tertiary latency controls.

We found “Auto” to be the best “VRIN Loadline Calibration” setting to keep our CPU near our 1.25V setting during changing software loads.

Fan settings can be changed at any time using Gigabyte’s Smart Fan 5, by pressing the keyboard’s “F6” key. Other quick access settings include firmware programing via the “F8” key.

The only things really worth mentioning in our frequency chart is that AIDA64 presents so light a load that it allowed us to run 1.25V and reach 4.80GHz on all cores, while the heavier load of Prime95 forced us to drop our CPU to 1.00V just to keep heat in check. Both boards reached the same CPU frequencies, though the X299X Designare 10G edged out the X299 Taichi CLX in memory data rate.

Bandwidth is more important than data rate, and the X299 Taichi CLX’s lower overclock outpaced the higher clock from the X299X Designare 10G. Differences like this are typically caused by firmware attempting to compensate for the higher frequencies by using looser advanced timings, in a configuration where we’re only using fixed primary timings.