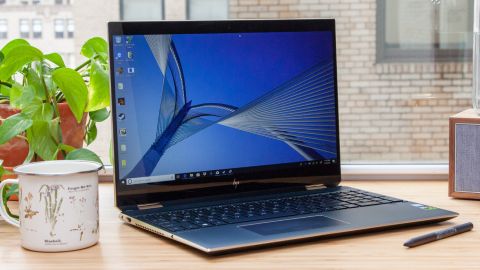 The HP Spectre x360 (15-inch) is a powerful convertible laptop for creatives, with impressive audio, but the display is too dim.

HP always brings it’s best design to the Spectre lineup, and, for the most part, that’s the case here. Our review unit came in a new “Poseidon blue” color, though it’s also available in a more traditional "dark ash" silver. I really like the blue, which is subtle, but a refreshing change from silver or black. On the lid, the blue is broken only by a pale gold HP logo. That light gold also surrounds the rim of the computer and the hinges, all of which are angular like diamonds. The Spectre is like someone's piece of jewelry.

But in a controversial choice, HP sawed off the back two corners, creating a sharp and angular design. But it’s for a functional purpose: That left corner is where the power button is, and the right corner is where one of the Thunderbolt 3 ports are. I’m not a fan of it as a look; I think that it takes the Spectre’s diamond cut edges to an extreme. But my colleagues were of diverse opinions about it. Some liked it aesthetically, while others only expect those types of angles on gaming notebooks. And the edges are a little sharp, which you may notice when feeling around for a button or port.

Lifting the lid reveals the 15.6-inch, 4K display. While the side bezels are quite thin and the bottom bezel is smaller than that of last year's model, HP says it made the top bezel thicker to accommodate the slimmer bezels elsewhere. It’s noticeable, and I wish HP would’ve put more space under the screen than above it--it looks like the screen has a massive unibrow. It’s more than enough room for the infrared webcam used for video chatting and facial recognition.

The aluminum deck is also the same shade of blue, and the touchpad also has pale gold edges. There’s a fingerprint reader on the deck below the number pad.

For a 15-inch laptop, there seems to be a dearth of ports. On the left side are the power jack, HDMI output and a headphone jack. On the right side, besides the Thunderbolt 3 port on the back right corner, are another Thunderbolt 3 port, USB 3.1 Gen 2 Type-A and a microSD card slot.

Our Spectre review unit came armed with an Intel Core i7-8750H, Nvidia GeForce GTX 1050 Ti Max-Q, 16 GB of RAM and a 1 TB PCIe-NVMe SSD. That’s way more than enough power for anyone who is just using it for web browsing, streaming music or video and word processing or editing spreadsheets.

To stress test the Spectre, we ran Cinebench R15 10 times on a loop. It had a mostly steady decline from its initial score of 1,059.6 to a score of 1,038.1 on its last run. There was, however, a dip between runs 3 and 4, where it fell below 1,000 but then stabilized for the duration of the stress test. During this test, the CPU ran at an average clock speed of 3.1 GHz and measured an average temperature of 87.1 degrees Celsius (188.8 degrees Fahrenheit).

The Nvidia GeForce GTX 1050 Ti Max-Q isn’t exactly a gaming powerhouse. Still, you could play some games on middling or lower settings. But the Spectre is meant to be a creativity machine, so you’re more likely to use it to get a small boost in photo or video editing performance.

On 3DMark Fire Strike, the Spectre earned a score of 6,639, easily beating the average (3,540, though not all premium laptops have discrete GPUs and, thus, achieve lower scores), and the competition, except for the XPS 15 (6,780).

To test it for gaming, I ran the benchmark we often use for budget gaming laptops: Rise of the Tomb Raider on high presets at 1080p (FHD) resolution with SMAA anti-aliasing and exclusive full-screen on. The Spectre ran the game at 40.6 frames per second.

The 15.6-inch, 4K touchscreen display on the Spectre is unfortunately dim. When I watched the 4K open source film Tears of Steel, I could see all of the action, but I desperately wanted to make the screen brighter. Even though it measures as extremely vivid, the bright purples and greens in a lab seemed less interesting due to the dim display. The fact that the touch screen is so glossy doesn’t help when brightness isn’t compensating for it. In other words, there’s a noticeable glare.

The Spectre’s display measured an average of 247 nits on our light meter, lower than the premium laptop average (328 nits) as well as the XPS 15, ThinkPad X1 Extreme and ZenBook Pro 15.

That being said, the screen does well with color. It covered 157 percent of the sRGB color gamut, beyond the average (118 percent), though the XPS and ThinkPad X1 both had even more vivid 4K displays.

With 1.5 mm of travel and 71 grams of force required to actuate, the keys on the Spectre x360 aren’t as clicky as I would like, but I never bottomed out. On the 10fastfingers.com typing test, I reached 108 words per minute with a 2 percent error rate; both of those measurements are within my usual range.

The 4.7 x 2.3-inch touchpad is plenty spacious, but not always as responsive as I would like. Notably, it didn’t always respond to my gestures, including four-finger swiping up to see the timeline. It more often worked with simpler gestures, though I did have one time where even two-finger scrolling didn’t work as expected. The Spectre uses Synapticd drivers rather than Microsoft’s own Windows Precision drivers, which seem to work seamlessly every time. I wish HP would have opted for the Microsoft option.

The Spectre comes with a stylus that works with Windows Ink. It’s comfortable enough and has two programmable buttons on the barrel (customizable through HP Pen Control), though I wish it had an eraser function on the end like Microsoft’s Surface Pen. Despite 1,028 degrees of pressure sensitivity (interpolated to 4,096 degrees) I still had issues with some lighter touches and, very occasionally, experienced some lag.

HP’s partnership with Bang & Olufsen once again results in strong speakers. When I listened to Daft Punk’s “Get Lucky” on the Spectre, synths, guitars and vocals were all clear and loud. Even the song’s dance-worthy bass line was stronger than on most laptops, though I wasn’t able to turn it up as much as I would like with the HP Audio Control app.

That app also has presets for different types of music and environments, but I found that most of them distort the music. I recommend leaving those alone.

The Spectre’s bottom casing is harder to remove than it looks.

At first, it appears to be held down by just two small Torx screws. Those come out easily with a Torx T5 screwdriver. But to go any further, you’ll have to remove the rubber foot strips on the bottom. And it may be impossible to get those back on satisfactorily afterwards without HP’s own repair kits. Under those strips are six Phillips head screws.

We couldn’t destroy the rubber footers on our loaned review unit, but the service manual suggests that when if you get in there, you can upgrade the M.2 SSD, as well as the RAM, which is under a heat shield.

The Spectre lasts just long enough for a day’s work. On our battery test, which continuously browses the web over Wi-Fi, streams videos and runs OpenGL benchmarks (all with the screen set to 150 nits brightness), the Spectre lasted 8 hours and 9 minutes. That’s 20 minutes below the average, but higher than both the ThinkPad X1 Extreme and the ZenBook Pro. Only the XPS 15, running for 8:28 with a higher-resolution 4K display, lasted longer.

Ah, the rare FHD webcam. The Spectre x360’s camera is nice and sharp. In a photo I took at my desk, I could see individual hairs on my head, though the lights behind me were blown out. It’s color accurate, too, as it picked up the exact shade of blue in my eyes.

There’s a kill switch for the camera on the right side of the chassis. It works like a light switch: just flip it and the camera shuts off. There will be no power to it, and it’s removed from the device manager. The webcam simply won't work. It’s a neat trick, though I suspect some people will still want the visual comfort of seeing something blocking the lens itself, like on Lenovo’s ThinkPad X1 Extreme and some other ThinkPad devices.

HP doesn’t overload the Spectre with unnecessary software. HP JumpStart serves as a basic instruction manual for newcomers with tips, but you may want to uninstall the bloatware: Netflix and McAfee Security.

There are also all of the usual extras that come with Windows 10, like Drawboard PDF, FitBit Coach, Phototastic Collage and two separate versions of Candy Crush.

HP sells the Spectre x360 with a one-year warranty.

Our Spectre x360 review unit costs $2,049.99 with an Intel Core i7-8750H CPU, 16 GB of RAM, an Nvidia GeForce GTX 1050 Ti Max-Q and a 1 TB PCIe-NVMe M.2 SSD and a “Poseidon blue” chassis. As of this writing, HP lists the color as being a “limited time” free upgrade, so it’s possible HP will charge extra if you want anything other than “dark ash” silver in the near future.

In the middle, you could bring the model I reviewed down to 8 GB of RAM to shave off $120, or reduce the amount of PCIe M.2 SSD storage. The most-expensive option is identical to the one I tested, but with 2 TB of storage for an extra $400.

HP’s newly designed Spectre x360 is a beautiful powerhouse. The cut-corner look is controversial, but at least it’s somewhat functional. The laptop put up strong productivity performance numbers, and the GTX 1050 Ti Max-Q adds a small pop of graphics oomph and even allows for some light gaming.

If you’re looking for a better display or a lighter machine, either the Dell XPS 15 or Lenovo ThinkPad X1 Extreme may better fit your needs. Both of those, however, are standard clamshells, so if you’re looking for 2-in-1 functionality, the Spectre x360 is a solid--if somewhat dim--option.