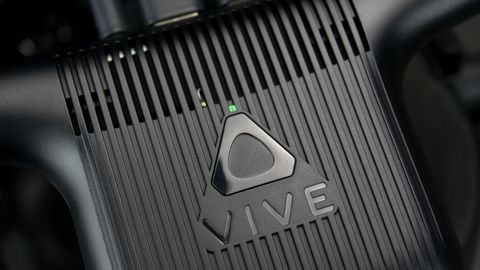 The Vive Wireless Adapter upgrade kit is a fantastic upgrade that existing Vive owners should strongly consider, but compatibility issues with AMD hardware (and the company's own Vive Pro) hold it back.

Removing the Tether From the VR Experience

On its own, HTC Vive, with its room-scale VR capability, offers an immersive VR experience that transports you into virtual worlds. However, there’s an ever-present cable you must keep track of that keeps you tethered to the real world. The Vive Wireless Adapter solves that problem and allows you to forget about the physical world and experience VR without worrying about stepping on or tripping over a wire.

The freedom that the Vive Wireless Adapter offers makes the VR headset feel like a whole new product. It is wonderfully freeing to play a game like Sword Master VR, where you’re constantly spinning around to engage opponents that sneak up on your flank, or Space Pirate Trainer, where you’re always moving frantically. VR is all about immersion, and to me, the tether cable dangling at my feet has always been the biggest distraction from the virtual world.

The wireless kit gives you the freedom to step into a new world and ditch the physical anchor that keeps you tied to reality, and there’s no question that once you cut the cord, you won’t want to go back to a wired VR experience. The problem is, the wireless system doesn’t always work the way it should.

We absolutely love the untethered VR experience and would love to recommend it to anyone. However, right now, this product isn't right for everyone, because it struggles with compatibility issues, particularly with Ryzen systems.

We experienced several problems with the Vive Wireless Adapter when it was connected to a Ryzen-powered system, including but not limited to signal drops that resulted in blank frames, complete loss of image signal and noticeable latency. Performance was strong on two Intel-powered systems we tried, but after a software update, we also experienced problems connecting to the Vive Pro from these computers. In other words, if you use a Ryzen-powered computer or connect to a Vive Pro rather than a regular Vive, you may want to wait for updates.

The Technology Behind the Wireless Vive Adapter

HTC’s Vive Wireless Adapter is the product of a three-way collaboration between HTC, DisplayLink and Intel.

DisplayLink created the video compression technology that enables the transmission, which it first introduced to the world at CES 2017. DisplayLink’s solution can handle data transmissions up to 24Gb/s, which is approximately four times the bandwidth needed to drive a Vive headset. Theoretically, it should provide ample bandwidth to scale up to future high-resolution headsets. Indeed, DisplayLink said the technology could scale to support dual 4K displays at up to 120Hz, which means it could be adapted to support other headsets, such as the Pimax 5K+ or Pimax 8K ultra-wide headsets.

Intel also played a critical role in developing the Vive Wireless Adapter. The company adapted its WiGig technology to enable wireless communication from the host PC to the untethered headset. Intel introduced WiGig at IDF 2014 and touted it as a wireless peripheral dock of sorts, but the technology failed to gain traction in that market. With the emergence of VR headsets, Intel saw an opportunity to revive the development of its high-bandwidth wireless data transmission solution.

Setting up the Vive Wireless Adapter

HTC’s wireless upgrade kit is a four-part solution, which includes a receiver that you attach to the headset, a WiGig PCIe card to install in your computer, a WiGig wireless Link Box and an external battery pack to power the device.

HTC’s instructions, which you can find here, suggest installing the WiGig card first. The expansion card features a PCIe x1 interface, which should make it compatible with any PCIe slot in your motherboard as long as it supports PCIe Gen3. HTC noted that some motherboards might have compatibility issues and suggests trying a different slot if that occurs.

With the expansion card installed, attach the wireless Link Box tether to the thread on the back of the card, and position the camera to look over your play area. The camera features a standard ¼ thread so that you can attach it to a tripod, or you can use the included mount, which can attach to any LCD monitor.

The wireless receiver features two large antennas, which protrude from each side of the device. On the top, you’ll find a power button shaped like the Vive logo and an LED status light. The bottom of the receiver features touch fastener straps and a leather strap that wraps around the rear of the Vive’s head strap to secure it in place.

To remove the old cable, slide the port cover towards the front of the headset until it separates from the device and carefully remove one plug at a time. When you replace the cable, make sure to place the USB cord in the central port, not the accessory port on the side.

HTC designed the Vive Wireless adapter to support the original Vive headset and the Vive Pro. The company ensured that the receiver device would work with the fabric head strap or the Deluxe Audio Head Strap for the original Vive without any additional accessories, but you do need additional parts to hook it up to a Vive Pro (more on that in the next section).

There are two slots on the bottom of the wireless adapter that hooks onto the rigid section of the Deluxe strap. The receiver also includes a hook that enables you to hang the receiver on the cable routing loop on the stock Vive’s fabric strap.

If you have a Vive Pro, the setup process is slightly different, a little bit more involved and more expensive.The Vive Pro requires an additional purchase on top of the adapter. The $60 Vive Pro Attach Kit includes a short Vive Pro cable, a cushion for the rear of the head strap and a replacement for the bottom section of the Vive Wireless adapter.

The new bottom section features a different style of hook and fastener strap, which are compatible with the Vive Pro’s rigid strap. You must remove the original plate, which is held with three screws, and replace it with the Vive Pro-compatible part.

The Vive Pro upgrade kit also includes a foam piece that should be used to replace the triangular section found on the Vive Pro's rear. Implementing the cushion adds support to the overhead strap and gives you a place to secure the wireless adapter. It also provides a barrier between your head and the receiver, which can get hot during extended use.

The Vive Wireless Adapter features a set of ports on the top for the original Vive’s 3-in-1 tether cable, which allows the short tether to stretch across the top of your head. The Vive Pro’s single cable connects to the bottom of the wireless adapter, and the cable runs along the side of the head strap like the stock Vive Pro tether cable.

The Vive Wireless Adapter gets its power from a lithium-ion battery, but HTC didn’t cram the cells into the wireless receiver. Instead, HTC opted for an external battery source, which has pros and cons. Leaving the battery cells out keeps the weight down, which is especially important for a head-mounted device. But a head-mount option would have been nice to have in order to condense the setup into one piece.

It’s easy to forget about the battery pack when you pull the headset off, which could lead to damage to the cable, battery pack, or wireless receiver. Moreover, using a tethered battery pack to untether your headset from the battery pack’s USB cable seems somewhat counterintuitive and at least a little bit ironic.

The Vive wireless adapter’s battery pack is a standard HTC PowerBank with Qualcomm Quick Charge 3.0 compatibility, which slips into a plastic holster that you can attach to your belt or your pocket. The tethered battery doesn’t really get in the way, but it does limit your wardrobe options. The pack weighs 230g, which is more than enough to bring your pants to the ground while you’re playing if you don’t have a belt on. Don’t expect to use a wireless Vive headset with sweatpants or PJs on.

The included PowerBank holds enough juice to keep the Vive running for close to 2.5 hours, and after blowing through a battery, I would welcome a much larger pack. HTC does offer extra PowerBanks, and I recommend picking up at least one, so you always have a charged pack ready.

The Vive Wireless Adapter requires an app to function. The Vive Wireless utility enables you to pair your transmitter with a receiver, while the software monitors the signal strength of the transmission. The software installation also includes the drivers that enable the WiGig and DisplayLink hardware in the wireless adapter.

Current page: Removing the Tether From the VR Experience