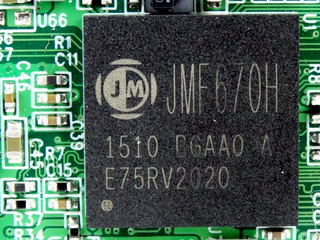 The road leading to Computex is paved with engineering samples. Over the next few days, you'll see us testing new controllers from JMicron and Phison, both with fresh flash configurations that we haven't seen used on retail products yet.

First up is JMicron, which sent over three parts in configurations we're expecting to see from partners at Computex. The JMF670H controller was first demoed a year ago in Taipei, but is now coming out of its development stage. This four-channel processor will compete in the low-cost mainstream category against Silicon Motion's SM2246EN and upcoming SM2256 controllers (the latter previewed on Tom's Hardware just a few months ago). Phison also has alternative in this segment, such as the S8 and S9 controllers that are already shipping.

We've talked about the race to the bottom. The mainstream space is where the large volume is. NAND flash makes up the bulk of an SSD's bill of materials, so in order to hit lower prices, the flash has to cost less. NAND comes from wafers, the price of which is fixed. If you want cheaper flash, you need to harvest more dies per wafer. This creates a big (or in this case small) catch-22. The smaller you shrink the manufacturing process, the less insulation there is between flash cells, causing problems with endurance and data retention.

Overcoming those issues requires more powerful controllers able to cope with beefier error correction. So now we have this issue where the cost of flash is going down, necessitating sophisticated (and increasingly expensive) processors. This adds cost, but ultimately shifts the burden of maintaining reasonable pricing to the controller vendor, and not the giant flash fabs.

SSD controllers have always played a large part in our coverage of solid-state storage. But their importance will increase not only as it pertains to performance, but also endurance. In the years leading up to now, keeping flash healthy was relatively easy. We're on the final steps of 2D planar flash though, with program/erase cycles dipping down to 500. NAND flash manufacturers are combating this two ways. The first is with 3D cell structures that pack more bits into the same amount of space. Samsung is already shipping 3D V-NAND technology in its 850 Pro and 850 EVO. IMFT (Intel Micron Flash Technology) announced a 3D strategy but retail products will not come to market for some time. Flash Forward, the partnership between Toshiba and SanDisk, recently announced BiCS, its 3D NAND product.

With 3D cell structures still a way out for most flash makers, steps to extend the life of 2D planar NAND were taken. Pseudo SLC (pSLC) has played a large role in mainstream SSDs for some time now. Samsung introduced TurboWrite with the 840 EVO in 2013. SanDisk released similar technology to TurboWrite, calling it nCache.

Just a few weeks back, IMFT announced FortisFlash, a product name for what was once simply referred to as MLC+. FortisFlash is a component of L95B, the same 16nm flash found in Crucial's MX200 and Micron's M600. Micron used Dynamic Write Acceleration to describe the M600's pSLC functionality.

We normally associate pSLC write modes with performance increases, but the technology also helps extend endurance as well. In the latter stages of 2D planar NAND, this is imperative. The short of it is that in order to take advantage of modern flash technologies, companies need new controllers with more horsepower.

MORE: Best SSDs For The Money
MORE: How We Test HDDs And SSDs
MORE: All Storage Articles
MORE: Latest Storage News
MORE: Storage in the Forums