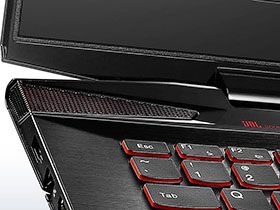 Gamers looking for portability and value should view P/N 59420895 as a starting point, examining the various configuration options of alternative Y50-70 models before making any final purchase decision.

Slim And Sensitive, Or Lean And Touchy?

Lenovo's push into the touch-oriented market goes back at least to its CES 2013 launch of the world’s largest production tablet PC. Today, we see the focus across several models of traditional notebooks, too. Rather than question the value of a touchscreen in the enthusiast gaming market, or any other place where you really need a mouse still, we’re going to look at how this slim gaming notebook stacks up in the areas of slimness, gaming and being a notebook. To most of us, a touchscreen on a non-convertible notebook is an added feature rather than a necessity.

But wait a second. Didn’t that last link (above) show that the -70 version packs a 4K display into the Y50’s diminutive dimensions? Who’s right?

Everyone is, actually. You really need to look at the part number to figure out what you have, as dozens of these indicate anything from a slight production deviation to a full-fledged overhaul. That’s why I’m forced to pepper this article with product number 59420895, even though a search for that string on Lenovo’s own website produces no results. You can find it on Amazon.

Lenovo ditches the optical drive in favor of thinness, which makes some sense since most games are now downloadable. It was only able to squish the Y50-70 down to 1.1”, since that discrete GPU requires additional cooling.

Lenovo similarly rid the design of a battery bay, opting instead for a power source that can be replaced only after removing the bottom of the Y50-70’s chassis. The battery itself is also smaller than what you'll find on many gaming notebooks at 54Wh, and both the CPU and GPU favor slimness by not having a socket or slot. Both are BGA.

The company even slims its warranty down to one year, compared to the two to three years of some competitors, along with the boxed extras, including only the required 6.1” x2.5” x1.2” power brick. Now that we’ve covered the specs, let’s take a look at what else the Y50-70 Touch 59420895 gives its buyers.

Current page: Slim And Sensitive, Or Lean And Touchy?