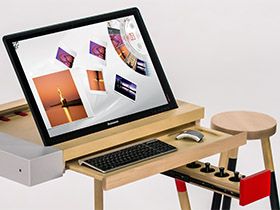 The rapid uptake of touch-based interfaces is leading to so many new form factors. We're seeing smartphone screens grow, Ultrabooks turn into convertibles (to give them that tablet-like feel), and all-in-one desktops struggle to find their place in the world. After all, who really wants to reach up and touch their monitor when a keyboard and mouse does the job just fine?

Realizing this, Lenovo set out to do something a little different with its IdeaCentre Horizon, building an all-in-one with a 27" 1080p display and calling it a Table PC. Naturally, this thing's too big to be considered a tablet, and at close to 20 pounds, it's not something you'd want to haul around with you. Nevertheless, Lenovo arms two of its four Horizon SKUs with a built-in battery and carrying bag. The extent to which we see ourselves moving a machine this large around would probably be from the kitchen to the backyard, or maybe from a bedroom to the living room for family-night gaming. It probably wouldn't leave through the front door, despite its modest weight and impressive 1.3-inch thickness. But that seems to be the point; you get a nice big surface you can relocate at will, for any number of reasons.

Before we dig further into Lenovo’s vision of the ultimate all-in-one desktop, let's have a look at the machine's specifications in comparison to Dell's previously-tested XPS One 27 Touch.

The pricey Dell unit employs more performance-oriented parts, including a 2560x1440 screen, to justify its 42%-higher price. Alternatively, Lenovo counters Dell with portability in the form of lower weight and an integrated battery, adding to the attractiveness of saving $1000. Still, these two all-in-ones are the most closely-matched from a component perspective of any we’ve tested.

Next Page What Is A Table PC Used For, Anyway?
21 Comments Comment from the forums
Be In the Know