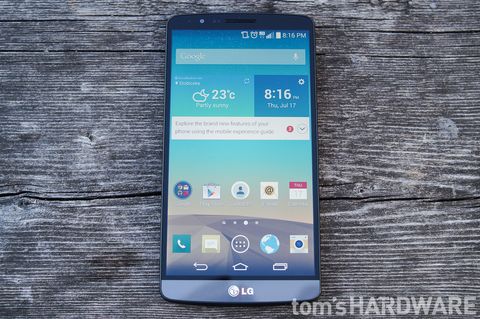 Comparing The G3 To Its Competition

We had the opportunity to test both the Canadian (which is the same as the U.S. GSM version) and Korean variants of the G3. Before we dive into our review and benchmarks, we’ll compare the G3's specifications and features to several of its major flagship competitors, including the Apple iPhone 6 Plus, OnePlus One, Samsung Galaxy Note 4, Samsung Galaxy S5 and Sony Xperia Z3.

Four of the six phones we are comparing (including the G3) use Qualcomm’s popular Snapdragon 801 SoC, a faster version of the Snapdragon 800 that appeared in the G2 (read this article to learn the differences between the Snapdragon 801 and 800). Consequently, the overall performance of these phones should be fairly similar. However, there are several other factors that can affect benchmark results like software and the phone’s ability to dissipate heat.

The iPhone 6 Plus’ A8 and Galaxy Note 4’s Snapdragon 805 are more recent releases, and thus offer improved CPU and GPU performance over the G3. While LG may not be able to match these newer phones in our metrics, that's not reason enough to dismiss the G3. The 801 is still a capable SoC.

Most versions of the G3 have 3GB of RAM and 32GB of internal storage (some European models only come with 2GB of RAM and 16GB of storage). This is nice to see, as most flagship phones still ship base models with only 16GB of flash, which just isn’t sufficient for the many things we can do with our phones today. The G3 also has a microSD slot, a nice addition after the lack of expandable storage in the G2. All of the other flagship Android phones, apart from the OnePlus One, have microSD slots too, so we guess OEMs realized that this a feature Android users appreciate.

Looking at power sources, the G3 has a large 3000mAh cell, which is comparable to the larger batteries of all the phones we're looking at. Unfortunately, battery size isn’t everything since there are other factors that determine how long a phone can run, such as screen size and power draw. As you’ll see later in our tests, the G3 doesn’t have the best battery life when it's up against the competition. Nonetheless, it still runs longer than many flagship phones from last year, so run time is all relative.

Even though the international G3 does support wireless charging, you can only get it on the North American model if you invest in the official LG Quick Circle Folio Case ($60). This gives carriers a higher profit margin accessory to sell to those who want a feature that international buyers get out of the box. Frustratingly, while Qi is the charging standard on the international G3 and most of the North American carriers, if you get the AT&T variant, it uses the less popular PMA standard, locking you into only using the case that AT&T sells.

Like five of the six phones we are comparing, the G3 only has a mono speaker. It seems Sony and HTC are the only OEMs that understand the value of front-facing stereo speakers. At least, at 1W, the G3’s driver is louder than the average smartphone's.

As for connectivity, there are different G3 models for each of the four main North American carriers, supporting different selections of LTE bands. It would be nice if LG took the lead of Apple and Sony by simply producing two models: one for the GSM carriers (AT&T, T-Mobile and the Canadian carriers) with as many LTE bands available as possible, and one model for CDMA carriers. The G3, like the other five phones in today's review, supports 802.11ac Wi-Fi, NFC and Bluetooth 4.0. It even has an IR port so it can act as a universal remote.

Despite being all-plastic, the G3 looks like a premium device. It feels solid with minimal flex, although it does bend more than the other phones in our comparison, and it has a high level of fit and finish.

The G3’s plastic back has the appearance of brushed aluminum, and even though it’s slipperier than the rubberized texture on the back of the Galaxy S5, we prefer its metallic appearance over the S5’s golf club handle look. Of course, simulated aluminum can’t replace the look and feel of the real thing. But there are several advantages for using plastic; it reduces cost, decreases weight and allows the back (and subsequently, the battery) to be removable. That's a feature missing from the all-aluminum iPhone 6 Plus and HTC One M8.

Unfortunately, the G3, like the all-plastic Galaxy S5, Note 4 and Xperia Z3, has an issue with performance throttling due to overheating. The plastic chassis doesn’t dissipate heat nearly as well as metal. While this thermal issue does affect the G3’s potential when it's pushed to its limits, such as when we run our benchmark suite or play 3D-heavy games, it doesn’t have an impact on normal daily usage.

Another feature missing from the G3 is water and dust resistance. While still a relatively new feature for flagship phones, both the Galaxy S5 and Xperia Z3 come with basic environmental protection.

For a 5.5-inch phone, the G3 is very compact. If you look at the dimensions in the specifications table, it isn’t much bigger than the Xperia Z3 or Galaxy S5, both phones with smaller screens. Even though it has the same size screen as the iPhone 6 Plus, the G3 is so much smaller and lighter, you might confuse it for the 5.2-inch G2. In fact, the G3 is the second-lightest phone of the six flagships in our comparison. Only the 5.1-inch Galaxy S5 is lighter. I'd still call it a two-handed phone, but the G3’s lightness and small bezels make this phablet much easier to handle.

On the software side, the G3 is, unfortunately, still running an older version of Android KitKat (4.4.2). This is the same build that it shipped with when it came out last year. The other four Android phones we are comparing the G3 to have either been updated to or came with Android 4.4.4. While all Android OEMs have vastly improved the speed that they deliver software updates, they are always going to lag a little behind Google, so none of them are running Android 5.0 (Lollipop) yet. However, LG has said the reason it has not released a 4.4.4 update for the G3 is that it wants to jump directly to 5.0. This update is already rolling out in the UK and will debut for North American customers early in 2015.

Current page: Comparing The G3 To Its Competition

Prev Page LG G3: A Plethora Of Pixels And A Laser! Next Page LG G3 Look And Feel
27 Comments Comment from the forums
Be In the Know