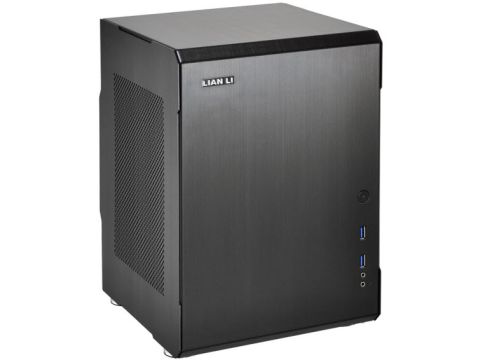 With an $80 price tag, the PC-Q34 is a solid pick for anyone who wants a compact, minimalist, easy-to-build case, and is willing to plan their cooling setup ahead of time.

The PC-Q34 is available in two different SKUs, each of which is offered in four different colors including black, silver, red, and gold. The base PC-Q34 model includes just the case and will carry an MSRP of $80. The PC-Q34KMP combo (pictured below) also includes a 30.7” x 11.8” (780mm x 300mm) mousepad, as well as a color-matched wireless keyboard and mouse, and carries an MSRP of $140. Unfortunately, at the time of writing, only the PC-Q34KMP is available for purchase in the US, and Lian Li has yet to confirm whether the base PC-Q34 model will be available in the near future.

On the outside, the PC-Q34 maintains the same minimalistic style as the rest of the cases in the Q-series, with a plain satin black, brushed aluminum finish. The front of the case features a machined aluminum power button with a built-in power/HDD activity light, as well as a pair of USB 3.0 ports with ample spacing for oversized devices, and a standard pair of HD audio outputs. The PC-Q34 also features a pair of removable side panels, which are attached via a set of snap-in style connectors, and pull right off for easy access.

When it comes to the back panel, Lian Li chose to go a with a horizontal motherboard mount on the PC-Q34. Since this is by design a fan-optional case, the horizontal motherboard configuration allows tower coolers to draw cool air in from the sides of the case and jettison it out the rear with only the fan on the CPU cooler. The graphics card also benefits from this setup, because its now vertical orientation also gives it direct access to cool air.

Ideally, this design should allow for cool component temperatures, with less overall noise, but in practice it can be problematic for users who have a downdraft-style CPU cooler or a graphics card that dumps waste heat back in to the case. In any case (pun intended), the PC-Q34 still comes with a mount for a 120mm exhaust fan if you find you need the extra airflow.

Upon examining the rest of the rear panel, you’ll find a PS/2 form factor (i.e., full size ATX) power supply mount, as well as several thumbscrews, which we’ll get to shortly.

As far as features go, the inside of the PC-Q34 is pretty straight forward. The case has room for up to three 3.5” hard drives and up to two 2.5” solid state or compact hard drives depending on configuration. The small cage at the bottom of the case pulls out upon removal of the three thumbscrews at the back of the case, and is capable of holding one 2.5” drive mounted in the center of the tray or two 3.5” drives mounted together inside the tray. The mount at the top front of the case is capable of holding one 3.5” drive and one 2.5” drive.

Remember those two thumbscrews on the top of the rear panel we mentioned earlier? Well, the defining feature of the PC-Q34 is that once you remove the side panels and those two screws, the entire case opens up like a giant clamshell giving you unfettered access inside the case.

Once the top is popped and you’re inside, the vast openness of the case and the minimal set of features ensure a quick build. Simply drop in the motherboard and CPU cooler, slide the PSU in from the rear, add your drives, a graphics card, and maybe even an exhaust fan. Finally, plug everything in and tuck the extra cables under the motherboard tray and you’re good to go.

Speaking of cables, the PC-Q34 comes with the usual cable assortment for a compact case, including the standard power/LED cables, HD audio, and USB 3.0.

The case also comes with the standard assortment of screws, as well as rubber mounting shoes for the storage drives and two replacement female clips for securing the side panels. Lian Li also threw in a system speaker as well as a USB 3.0 to USB 2.0 conversion cable for motherboards which lack modern ports.

Once everything is in place and the side panels are back on, you end up with a sleek, clean, minimalist build that would fit in perfectly in both a game room and an office environment.