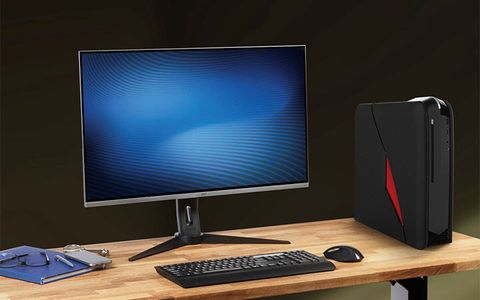 The Monoprice 33822 delivers off-axis image quality typical of VA panels with flush-mounted front layers. Light falloff was around 30 percent, and there was a red/green shift in the middle brightness steps. Detail stayed solid, so actual image degradation wasn’t too bad. From the top, detail was harder to see, and brightness decreased by about 50 percent. The color shift when viewing from above is the same as what you’d see when viewing from the side.

When an LCD panel is assembled with close-fitting layers, uniformity can sometimes suffer. The Monoprice 33822 showed only a few visible hotspots. We observed one in the lower-left corner and in the zones nearest the bottom backlight array. They were only visible when the room was completely dark and the screen completely black. The 13.47 percent result is respectable, especially at this price point.

The Monoprice disappointed a little when it came to speed. While it is certainly faster than a 60Hz screen, its practical performance puts it on par with 75Hz and 100Hz monitors. The 17ms response result was achieved with overdrive set to Fast. The Fastest option lowered it to 15ms but introduced too much ghosting.

Input lag was merely OK, and the total score was marred by the slower-than-average response time. Though hardcore gamers will want to consider something faster (and more expensive), casual players will have no problem fragging.

Budget monitors will be paired with budget systems, so we hauled out our AMD Radeon R9 285-based PC to check out Tomb Raider. In one area, Lara Croft crosses a bridge with exposed girders set at varying angles. With detail set to Ultra, there were no frame tears, and ghosting was only slightly visible during the fastest mouse inputs. We couldn’t detect lag. Frame rates stayed between 65 and 75 frames per second (fps).

During gameplay, color and image depth were exemplary, and since this game features more green and blue shades, we did not notice any lack of saturation. Warmer elements, like fire or flesh tones, looked solid but occasionally pale. The VA panel’s extra contrast was apparent when there were bright highlights set against dark and medium-toned objects. Their reflective quality added to the perception of depth and made a 2D space look like 3D.

The slight image softness we observed in Windows applications was completely absent in all the games we played. Photos and videos rendered with precision. Moving objects maintained good resolution without stuttering or breakup.

Prev Page Grayscale, Gamma and Color Next Page Conclusion
Be In the Know