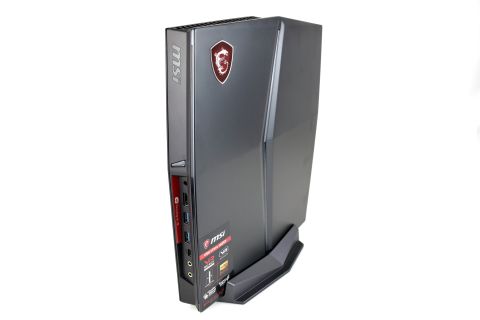 The MSI G25 Vortex 8RD is a Core i5-8400 and GTX 1060-equipped, console-size gaming PC that was designed specifically for the living room. The hardware under the hood is VR-ready, and it’s easy to connect an HMD with the front HDMI port. There’s no abundance of USB connectivity (you get only four Type-A ports), and if an Oculus Rift with Touch (which requires three USB Type-A ports at minimum) is to be paired with the Vortex, you’ll have to either settle for one Type-A port or some Type-C to Type-A adapters to connect your peripherals, or use a Bluetooth keyboard and mouse.

The look of the Vortex screams “gamer,” with RGB LED bars on the center and front edge of the smooth panel and in the power button, in addition to red LEDs illuminating the air vents on the bottom side (or left, vertically). The edgy design is subjective, but we think it’s fair to say that consumers in the 11-24 demographic will find it aesthetically pleasing.

The G25 Vortex is easy to upgrade, and it’s a good thing. The memory and storage that ship with the Vortex 8RD are mere starting points for enthusiast gamers. MSI disappointed us with the use of single-channel memory (a dual-channel kit would have provided better bandwidth performance), and although 16GB of RAM is more than enough for the latest AAA game titles, the speed and CAS latency are less than fantastic. The SATA 6 Gb/s M.2 SSD provides fast load times, but the capacity is somewhat minimal at 256GB. The 1TB HDD is also minimalist, and anyone with an extensive AAA game library would outgrow the device’s storage space fairly quickly. However, the storage is a good starting point for a new PC gamer (especially compared to the storage of a gaming console), and that’s the target customer MSI is clearly looking for with the G25 Vortex.

The use of an MXM GPU also gives the G25 Vortex a degree of longevity over other OEM SFF gaming PCs that use chip-down graphics; the end user could hypothetically upgrade the graphics card down the line (say, when Nvidia releases mobile Volta-based GPUs) if more performance is needed.

We knew that the MSI G25 Vortex 8RD would be a tough sell in a performance battle against DIY systems equipped with GTX 1060 6GB desktop graphics cards. Nvidia said we’d see about a 10% performance variance from the desktop version compared to the mobile GPUs when the mobile 10-series launched, and that’s roughly what we see from the Vortex across the range of gaming benchmarks in our suite. It doesn’t quite live up to the expectations of a 4K gaming machine, but no GTX 1060-equipped PC really is. However, if your living room sports a 1080p display, the G25 Vortex 8RD will provide excellent frame rates at High and Ultra settings in most modern AAA game titles.

The Vortex also excels in multi-threaded workloads against our Core i5-7500-equipped H270 reference system, thanks to its 8th-generation Core i5-8400 six-core processor. The higher core count improves performance in most of the productivity benchmarks, with the Vortex placing below our i7-7700K-equipped Z270 test rig and above the H270 system in CPU-intensive workloads.

At $1,499, the MSI G25 Vortex 8RD is not a value play for the hardware inside. (You could configure a comparable DIY system with a similar form factor for around $1,200 or less, with an OS included.) But the markup isn’t as considerable as some other custom-shop SFF options we’ve seen. For uninitiated consumers, we can see the Vortex as a viable option if they are seeking a powerful, console-size VR-ready gaming machine for their living room entertainment center.