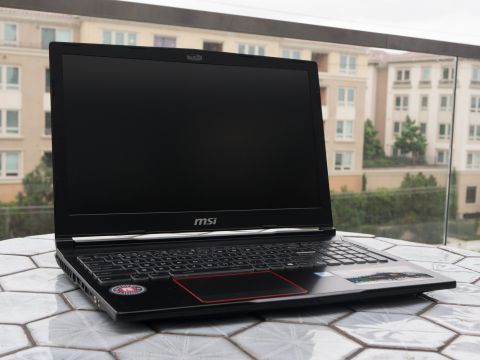 To illustrate the performance gap between these laptops, and one featuring a step down in graphics horsepower (GTX 1060), we’ve added the recently reviewed AVADirect Whitebook 16K2. It has an i7-7700HQ, 16GB of DDR4-2400 memory, a 250GB M.2 SSD, and a 1TB HDD to store large files. It features a fairly standard 15.6” FHD matte IPS display.

Finally, for comparisons at the high-end we’re throwing in the Aorus X7 DT v7, a sleek 17” laptop with a powerful GTX 1080; that review will be published shortly. The Aorus has an i7-7820HK CPU, 16GB of DDR4-2400 memory, a 512GB M.2 SSD, and a 1TB HDD. It’s display is a Quad HD (2560x1440) matte TN panel with a 120Hz refresh rate and G-Sync technology. This is a truly high-end laptop, and you can expect it best the competition in the majority of our benchmarks, but it's also significantly more expensive than the rest.

We expect the MSI GE63VR Raider to match the Alienware 15 and EVGA SC17 in gaming performance, but the SC17 should slightly overtake those two in CPU-reliant tasks. The main difference you’ll find between the three will likely come down to storage performance.

3DMark features a handful of benchmarks with different scenes, which individually test a system’s GPU and CPU prowess. The MSI GE63VR Raider and Alienware 15 both produce similar scores because of their near identical components. Also, all laptops with i7-7700HQs produce better physics scores than the EVGA SC17 with its i7-6820HK.

If 3DMark is to be considered the standard for graphical synthetic tests, then we consider Cinebench R15 to be the standard for synthetic processor testing. The single and multi-core tests measure the system’s CPU muscle, while the OpenGL shading test exercises the entire platform, with a slight edge given to powerful GPUs.

Cinebench paints a similar picture to 3DMark, with the 7700HQ-based laptops producing higher single and multi-core results than the SC17. This also means that the Raider only scores about as well as the Whitebook and Alienware systems. Meanwhile, the more powerful Aorus X7 DT v7 scores slightly higher--by about 3% and 5% in single core and multi-core performance, respectively.

CompuBench features a CPU-based Video Processing test and a GPU-based Bitcoin Mining test. Once again, the MSI and Alienware score similarly, with only 1% variance in scores for both tests. The GTX 1070 pulls the Raider ahead of the GTX 1060-based Whitebook by a considerable 14% margin in Video Processing, and a wider 33% gap in Bitcoin Mining. Unfortunately for the Raider, the EVGA’s i7-6820HK delivers better scores all around, and the Aorus’s GTX 1080 scores even higher.

We perform an IOmeter test on each laptop’s primary drive to measure basic random and sequential read and write speeds. The Raider contains a 512GB Samsung PM871; this is the first time we've encountered one in a gaming laptop. The Aorus contains the more common 512GB Samsung SM951, the Whitebook utilizes a 250GB Samsung 960 EVO, the Alienware 15 has a 512GB Samsung PM961, and the EVGA SC17 uses a 256GB Toshiba XG3.

The Raider's PM871 delivers decent 4K random speeds at QD2, but loses out to its competitors, even the notably slow XG3. The PM871 fares even worse in sequential speeds, delivering speeds well under 1,000 MB/s. This is a poor choice of components for a gaming laptop at this price point.

To approximate a system’s common workday performance, we use PCMark 8’s Microsoft Office and Adobe Creative tests. The tasks are platform-based, so systems with powerful CPUs tend to perform better here.

The MSI GE63VR Raider scores about as well as the Alienware and AVADirect in both Creative and Office tests, thanks in no small part to the current generation mobile i7 CPU. The Aorus scores slightly better thanks to its beefier hardware overall, while the EVGA drags behind. However, these differences are minor and you likely won't perceive much of a difference in real world Adobe Creative and Microsoft Office tasks.