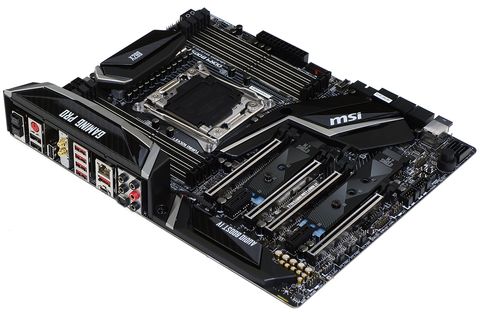 While MSI Command Center usually provides full overclocking control of integrated CPU functions, multiplier control didn’t work with this version of the software suite and a last-minute firmware update. Base clock, voltage, and fan controls still worked, as did the monitoring applets. A “Shrink” key drops the application into a configurable monitoring menu that’s particularly handy for monitoring voltage during an overclocking session.

Not found under App Manager, MSI Dragon Eye adds streaming video overlay to 3D applications, which could make it easier for someone to follow a YouTube tutorial through a game.

MSI Click BIOS 5 opens to “EZ Mode” the first time, but any changes to the Advanced menu causes it to select Advanced mode at the next UEFI access. Mode selection is made using the keyboard’s F7 key.

We initially received Intel’s Core i7-7800X, and the X299 Gaming Pro Carbon AC pushed it to 4.6 GHz at 1.25V. You’ll notice that the screen says 1.208V, which was somewhat accurate at or near idle, but the voltage climbed when loaded under Prime95.

The memory overclocked nicely to DDR4-4000, and the main reason that’s nice is because it’s only DDR4-3866 RAM. The firmware’s 1.330V setting produced a 1.35V measurement at the DIMM slot.

DRAM timings are completely adjustable, though this wasn’t required to test overclocking when using the test RAM’s modest 18-19-19-39 timings.

Mention of climbing voltage levels under load would cause most overclockers to double-check the motherboard’s CPU Loadline Calibration setting. Unfortunately, the noted climb from 1.208 to 1.250V when using Prime95 occurred at the board’s the lowest setting, and the feature couldn’t be disabled.

The X299 Gaming Pro Carbon AC has enough space to store up to six firmware configurations as user profiles. The OC Profile application also allows these profiles to be exported to or imported from a USB flash drive.

All of the fan headers can be switched between PWM and voltage fan speed control, using default or customized slopes.

If you can’t figure out why a part isn’t working, Board Explorer will show you whether it’s been detected. Unfortunately, it can’t detect SATA or USB configuration, though other firmware menus can.