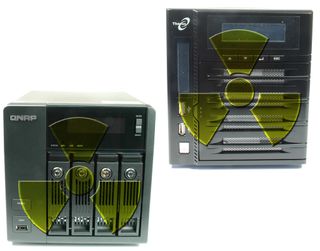 With the Atom processor's introduction, Intel triggered what could almost be called a small revolution. The processor played—and is playing—a significant role in the rapidly-growing popularity of netbooks and nettops. Now Intel's third-generation Atom processor, also designed for use in energy-efficient and affordable systems, is working its charm in the network-attached storage (NAS) segment.

Previous NAS devices used the second-gen "Diamondville"-based Atom 330. Such devices have already demonstrated some pretty convincing data transfer rates. Thus, our expectations are set high when it comes to NAS devices that use the new, third-generation Pineview-based Atom processors.

Clock speeds of the older Diamondville-based CPUs look very similar to those of new Pineview models. The dual-core Atom 330 (Diamondville) has a clock frequency of 1,600 MHz, while the dual-core Atom D510 (Pineview) runs slightly quicker, clocked at 1,660 MHz. The L2 cache is still 1MB (2 x 512KB), and the solution is manufactured using a 45 nm process. The biggest changes implemented in Pineview are the graphics and memory interfaces. For more on the architecture underlying Intel's Pine Trail platform, check out our launch coverage.

In short, Intel incorporated a graphics processor and memory controller onto the Atom processor die, and although this increases the processor's TDP by a few watts, the entire platform's power consumption drops due to the consolidation of chipset components. Because of this integration, a new chipset (little more than a southbridge, really) called NM10 Intel Express had to be developed.

The Intel 945GC chipset, used for the older Atom 230 and 330 processors, had a TDP of 22W. The NM10 Express dramatically lowers this to only about 2 watts. The combined TDP of an Atom 330 and 945GC chipset is around 30W, whereas a Pineview-based Atom D510/NM10 nets a TDP of around 15W. It should be noted, however, that the NM10 chipset only has two SATA ports, which makes it poorly-suited to NAS applications. We expect NAS vendors to look for other solutions to get more storage scalability.

In order to see what kind of power consumption and data transfer rates one can expect from a Pineview-based NAS, we took a closer look at the Thecus N4200 and QNAP TS-459 Pro. Both launched in the first quarter of 2010.

Next Page Thecus N4200: Features And Build
23 Comments Comment from the forums