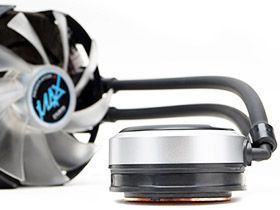 The latest closed-loop CPU coolers help push your stable overclocks to new heights, while quieting your PC to a soft, unobtrusive whirr. At least, that's what we're meant to believe. In practice, we've had a tough time demonstrating how this latest generation differs from the models that came before. The issue is that the physics of cooling haven’t changed. Though more exotic materials help transfer thermal energy from one component to another more efficiently, increasing airflow over a larger surface area remains the key to dissipating that heat from a radiator to the surrounding air.

More surface area is where liquid cooling gets its advantage. No longer limited to space above the CPU, where conventional heat sinks do their work, liquid cooling radiators can grow to fill whatever mounting surface you can free up inside your case. And they aren't limited by the amount of weight your processor interface supports, either. Liquid coolers can have as many fins and tubes as your manufacturer of choice can fit into that larger space. Radiators can even be moved into a cooler airstream, compelling some case designers to place mounting locations on their front panels or hard drive cage.

Increasingly, low-cost manufacturing makes closed-loop cooling an affordable option for many mid-budget builds. The technology still has two problems to overcome, though. First is that the displaced fans usually leave a hot voltage regulator on the motherboard. The second problem is that they still have trouble outperforming equally large (and dangerously heavy, if you build and ship your own machines) CPU-mounted designs. Today’s closed-loop coolers have solutions for both concerns.

Cooler Master tries to solve the debate about size by making its 280 mm cooler bigger than just about any air cooler we've seen. Zalman takes stab at the voltage regulator cooling problem by using an un-shrouded fan, which blows air in more directions than straight forward. SilverStone attempts to address both issues by making its 240 mm radiator nearly twice as thick, and then recommending that its fans be installed upside-down so that they blow towards the motherboard.

Socket-mounted coolers are most common, so we clamped on our most popular competing sample. At 47 ounces, the award-winning SE2011 (LGA 2011) version of Noctua’s NH-D14 exemplifies our cautions concerning dangerously heavy CPU-mounted designs.