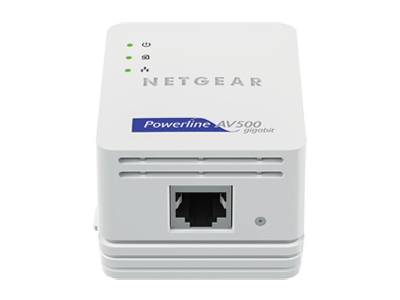 However, once you compare the peaks to the averages, we see more performance consistency from the same-room benchmark.

We begin with the 2GB folder transferred in the same room:

Netgear underperforms both Linksys and TRENDnet in our Same Room test. Previously, the XAVB5101 actually performed better in the Same Floor test on its own. But will that earn it a higher spot against the other AV500 adapters?

The Netgear XAVB5101 maintains second place! Interestingly, TRENDnet's TPL-408E2K really preferred the second floor to its first floor position, even against the Same Floor test, while the numbers for both Netgear and Linksys' PLEK-500 fell a bit.

That performance degradation appears to continue in the next test, from the first floor to the basement.

Netgear is outpaced in the First Floor to Basement test, slipping back into third place.

In the last 2GB folder test from the second floor to the basement, the client/server speeds swapped dominance, with Netgear's XAVB5101 still performing worse than its peers.

We next switch from the native 2GB folder copy test to a purpose-built bandwidth testing software suite from PassMark called PerformanceTest8, re-running the tests from each position. Our first benchmark evaluates the Netgear XAVB5101 kit in the same room using PerformanceTest8 and comparing performance against its AV500 powerline peers.

As in the 2GB folder test, we see Netgear's XAVB5101 perform better on the same floor, moving it into second place.

In the second floor to first floor test, however, Netgear drops into third place as its performance numbers are almost halved.

Thankfully, performance kicks back up a bit in testing from the first floor to the basement.

In the last test from the second floor to the basement, Netgear continues trailing its AV500 peers.

Even though our testing is presented in peak values, the averages don't change this story for Netgear. As we saw from Linksys when we tested UDP throughput, Netgear's XAVB5101 adapters flood the switch, causing extreme packet loss to the extent that testing wasn't possible.

We reached out to Netgear for more information about the performance differences and were advised that, at this point in the product's life cycle, its XAVB5101 is outdated compared to more recent offerings. Netgear was an early contender in pursuing a powerline product that supported the HomePlug AV specification, though. As such, the companion chipset chosen to go with Atheros' AR8035-A, the Atheros AR1500-AL1C, is older than the companion chipset used in competing adapters. This could have been a key factor in the XAVB5101's lower performance numbers. More evidence supporting that theory is that Atheros' AR1540, the companion chipset used in higher-performing powerline adapters we've reviewed, was Qualcomm's first chipset marketed as HomePlug AV2-compliant, and it's capable of achieving higher speeds.

Amazon and Newegg list the Netgear XAVB5101 for around $70. For the same price, you can get Linksys' PLEK-500, which is more consistent in its higher performance. The Netgear loyal might not mind this kit's shortcomings, but I would recommend a different solution based on our results, especially if you're performance-obsessed.

Prev Page Hardware, Software And Tear-Down
17 Comments Comment from the forums
Be In the Know