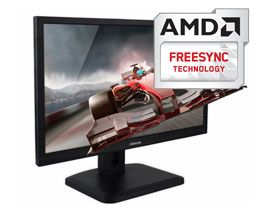 We’d rather game on an IPS or VA monitor but at this price, it’s hard to ignore the NX-VUE24A. It cuts a few corners but for smooth tear-free gaming it matches performance with more expensive products. Its FHD resolution means you won’t have to max your credit card to afford enough graphics horsepower. For the budget gaming rig, it’s pretty hard to beat right now.

Whenever a display is marketed specifically as a “gaming monitor” it usually carries a price premium. In the past such screens weren’t much different than their business-oriented counterparts. You might have seen a little fancier styling and perhaps some gaming-specific picture modes but at the core they’d be the same 60Hz panels seen in thousands of cubicles.

With the introduction of the Asus VG248QE in 2013 we saw a shift in thinking that truly set gaming monitors apart from the rest. A 144Hz refresh rate was the main draw to that product and it still can be purchased today for under $300. Many imitators followed and we’re still seeing 144Hz screens coming from every major display company.

The next big thing to appear were the competing frame-rate-matching technologies, Nvidia’s G-Sync and AMD’s FreeSync. With cheaper video cards unable to hit the high refresh rates gaming monitors are capable of, there had to be some way to improve the experience without simply adding more expensive processing power.

G-Sync came out first but immediately added a price bump of at least $200. About a year later, manufacturers finally started adding FreeSync to product lines and now we can say there are enough options out there that we’re seeing prices drop.

Since FreeSync doesn’t require additional hardware is should, theoretically, add nothing to the price of a monitor. In reality it hasn’t quite been that way but today we’re checking out a new screen from Nixeus, the NX-VUE24A. With a 24-inch TN panel and FreeSync from 30-144Hz it’s the first such monitor to break the $300 barrier.

In nearly every case when a monitor category sees a significant price drop it’s because a TN panel is in use. Despite flaws in the viewing angle department, it is still the easiest way to create a responsive monitor with fast refresh and low input lag. Here Nixeus is using a 24-inch LED panel from AU Optronics that runs natively at 144Hz. It is not overclocked or modified so it should run without issue at its full refresh rate. In our tests, it did so with nary a hiccup.

The best news besides the low price is a FreeSync range that covers a wide 30-144Hz. Since resolution is 1920x1080 pixels (92ppi), it’s possible to rock out some high framerates in demanding games without resorting to an expensive video card. All you have to do to keep motion processing smooth is turn on V-Sync to prevent the fps from climbing above 144.

Otherwise, the NX-VUE24A is a fairly straightforward package. There aren’t extra gaming picture modes or a fancy OSD controller or USB ports. But for less than $300, you get a color accurate screen that matches contrast with more expensive products and hits all the marks for both refresh rate and FreeSync operation. Let’s take a look.