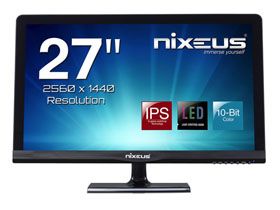 The OSD appears in the center of the screen by default but it is moveable. We slid it down to a corner to make calibration easier. It’s logically laid out but each function takes several key presses to activate. It’s a little clumsy, but once you have the PRO Vue 27P dialed in you won’t be using the menu often.

The one glaring flaw is that you can’t see multiple settings at a glance. In each sub-menu, you must first select a function before you can see its value. Luckily, the monitor has everything you need to achieve accurate color and maximum contrast. The backlight’s output range is relatively small but you can hit a desired number with reasonable precision. Contrast is set correctly, as is gamma, so you won’t need to change those settings.

DCR is dynamic contrast and we suggest leaving that off. Main SR sounds like overdrive, and its options even suggest that feature. But it’s actually a sharpness control. Increasing the setting adds unsightly ringing artifacts and makes small text hard to read. Leave it off for the best image quality. Speaking of overdrive, there isn’t any; luckily, motion blur isn’t too bad so we didn’t miss the feature.

There are no picture modes, but the different color temp presets have varying properties. The default is 6500K, which presents a fairly cool white point, but more importantly limits output to 185cd/m2. That’s well shy of Nixeus claimed 400cd/m2. To increase the white level, select either sRGB or User Define. The latter unlocks RGB controls, which helped us dial in decent grayscale and gamma tracking.

Ergonomic options include OSD position, transparency, and timeout up to 120 seconds. You can also select from six languages. There’s a video input selector, and you can choose analog or digital audio sources. If you want to return the PRO Vue 27P to its factory defaults, the final menu has a reset function.

Out of the box the PRO Vue 27P runs a little blue but tracks gamma well and hits sRGB color points with decent accuracy. Our main beef is that brightness is limited to 185cd/m2 in the 6500K color temp mode. sRGB increases output and improves white point accuracy. You can also adjust brightness and contrast if you wish. The best performance, however, is found in User Define. Not only can you tweak the RGB sliders, but output rises to a maximum of almost 300cd/m2. To get the best possible accuracy from your Nixeus, we suggest the following settings.