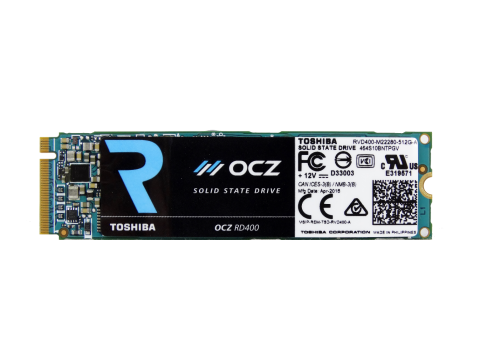 We place heavy emphasis on mixed workload performance measurements. An operating system drive rarely just reads or writes data, at any given time tens to hundreds of small update operations are taking place. An SSD works much harder than you can imagine, even when it appears to be idle.

All seven NVMe-protocol SSDs provide nearly identical mixed workload performance at QD 2 and 4. The OCZ and Samsung products stand out when we move up the scale to queue depth 8 and 16. The Intel SSD 750 products scale better at high queue depths. Intel based the SSD 750 on its enterprise SSDs, which it designed for heavy database workloads at very high queue depths, so it is not surprising to see it outperform the M.2 SSDs at high queue depth loads.

The first chart illustrates the SSD preconditioning phase and the second chart highlights the final 100 seconds of the 4 KB random steady state test. We are looking for a high level of performance with the least amount of performance variation, as a high number of drives in a RAID array can amplify performance peaks and valleys.

The Samsung 950 Pro 256 GB delivers the most consistent performance, but does so with less performance than the other products. The Intel SSD 750 SSDs deliver higher steady-state performance, but exhibit more variability during the test. The SSD 750 products deliver the best balance of the two factors we examine.

The Samsung and OCZ drives fall in the middle with high steady state write performance, but also experience the most variability. Normally, we would not oppose using the RD400 in RAID 0 on an Intel Z170 chipset PCH, but the RD400 products do not work properly with the Intel drivers that enable such a configuration. It is unclear if Toshiba / OCZ will work with Intel to resolve the issue, or how long it will take.

The RD400 delivers very high performance and we would like to see what the RD400 is capable of in RAID 0 and RAID 5 using Intel's RAID settings.