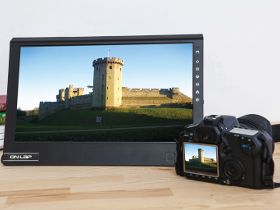 Here at Tom's Hardware, our desktops are complemented by large monitors (sometimes, several of them). Our notebooks tend to have nice high-res displays that let us get work done anywhere we go. But what about our tiny smartphones? We're accustomed to lots of space for productivity, and those four- and five-inch screens can be very straining on our eyes.

Yet, that's the direction mobility is increasingly going. These days, you can’t go to an airport without seeing hundreds of people glued to their smartphones or tablets. Although it's easy to get a bunch of entertainment onto a USB thumb drive, and convenient to burn time watching it on the road, wouldn't a larger screen help you actually enjoy it more?

GeChic looks to answer that question with its family of portable monitors, dubbed On-Lap. Thanks to a beefy internal battery, these thin, lightweight panels give you the larger size of a notebook-class screen, sans the unwieldy wall plug.

GeChic sent us its newest model, the 2501M. Offering a resolution of 1366x768 pixels, it’s just the thing for road warriors who want something larger than a tablet or smartphone to watch videos or browse photos when they’re away from home. You can hook up a myriad of different sources to the On-Lap, and view any kind of content a computer or phone can output. We're putting the On-Lap through our benchmark suite so that you know what to expect from a mobile monitor.

The On-Lap 2501M bridges the convenience gap between a tablet and a laptop. It’s lightweight at just over two pounds, and around half of an inch thick. Inputs and controls are on the upper-right side, so they’re easy to reach when the monitor is in use. A protective cover snaps on to keep the screen from getting damaged, then doubles as a hinged base that works equally well in your lap or on a flat surface.

In the screen's box, you'll find a small clip that can be used to attach a smartphone to the front of the panel. The fit is going to be secure, but you're pretty much limited to an iPhone or similarly-sized handset held in the landscape position. Anything significantly thicker or smaller won't stay attached reliably. Unfortunately, any device you use with the clip also blocks the lower-right corner of the monitor, too.

A large variety of devices can be connected to the 2501M: the On-Lap can extend the display of a computer, tablet, smartphone, camera, gaming system, or DVD/Blu-ray player. Thankfully, GeChic includes a full complement of cables for the On-Lap’s three video inputs, a practice we'd like to see more companies follow. HDMI is supported via a mini connector, while block adaptors for traditional HDMI cables and jacks are in the kit as well. Since HDMI carries audio too, GeChic integrates speakers and headphone output into the On-Lap.

If you have an MHL-compatible device, the On-Lap supports it directly. MHL, or Mobile High-Definition Link, is a relatively new standard that allows transmission of up to 1080p/60 Hz video and 7.1-channel surround sound, while simultaneously charging the connected device. This interface is showing up on more and more phones, tablets, and other portable devices.

Battery life is obviously dependent on how you use the On-Lap. The rated capacity is 9300 mAh from the internal lithium-ion cell. With the brightness maxed and the audio volume on 10, GeChic quotes six hours typical usage time. Of course, an AC adaptor is included so you can plug-in to charge the battery or simply power the monitor.